Although I happen to be doing a large amount of frontend engineering at work, I've never really viewed myself as a frontend engineer. This is partially a bit of self-conceit, but also I am simply still in the process of paying the necessary dues to rightfully claim that title. This is a story about paying the dues.

At work I am working on the cross-browser stage of a large application and had just finished ensuring Firefox and Safari played nicely, so next up was IE7. I fired up Virtualbox, selected a Windows XP image with IE7 installed, and ran straight into the brick wall that is the IE z-index bug.

Looking at the above squares, you might assume (well, if they were rendered with CSS instead of being a PNG...) they are layered using their z-index values. Perhaps the code looks like:

But unfortunately Internet Explorer doesn't respect the z-indexvalue, so you run into awkward scenarios. My awkward scenario was when I realized my modal YUI Dialogs were no longer rendering as I expected.

Instead, the dialogs were rendering beneath their underlay, making them difficult to read and impossible interact with.

The devastation was even more complete on IE6, where transparency workarounds cause the underlay to be pure black, and thus trying to use a dialog turned the screen into blackness (unless there was an <input> tag somewhere, in which case it was blackness punctuated by yet another z-index bug).

Working around this issue is actually quite simple, and is covered briefly on the YUI Container page. Simply rearrange the popups to be direct descendants of the <body> tag, and you'll be in business. 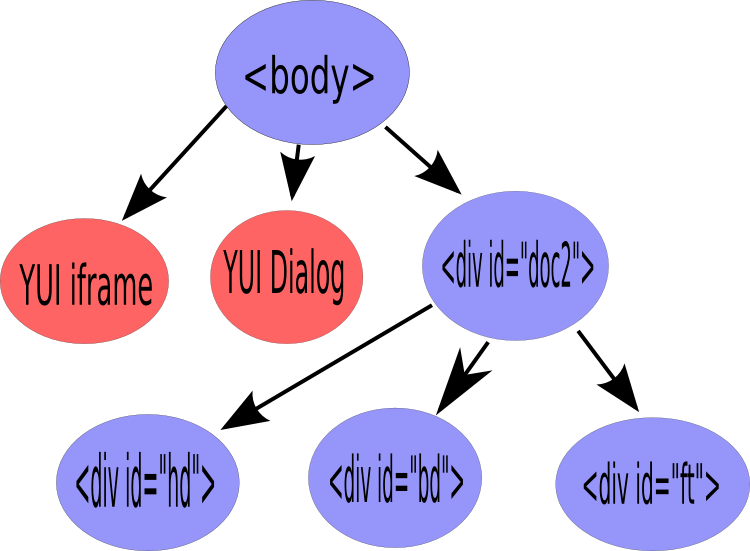 In your code, the change could be as simple as:

Then you're fixed. (Well, you may have to do some new positioning logic...)

After checking everything (hah...) worked, I went off to work on something else. Maybe I was triaging the cancer-like growth of bug tickets, or maybe I was eating dinner, let's not get caught up on the details.

Then I came back to run the application through a quick test-run, and calamity struck with quiet certainty. Let me give you the facts, and then you can spend a few moments trying to figure it out.

First let me describe the system that the bug was occuring in:

Now to describe the bug.

I was stuck at this point for a long time. A long time. Here are some more hints if you haven't gotten it yet.

Still confused? Hey, I was too.

And the sad conclusion.

There went four hours of my life.