I spent most of the day getting to know Cappuccino and developing a simple but slightly interesting application with it. First I'll quickly skim over the application I developed, and then I'll discuss my experience developing with Cappuccino. I put together Mahou, using Vik Singh's adaptation of the Yahoo! Boss Mashup Framework to Google App Engine and Cappuccino to create a somewhat featureful image search. 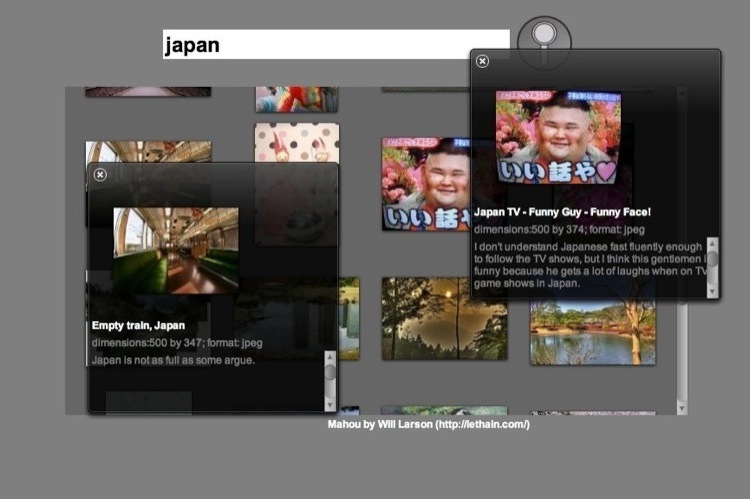 There are two particularly interesting features in Mahou:

Although it has a few rough spots, its a fairly useful image search, and the automatic loading of additional images (while retaining the previous images as well) makes it quicker to browse (and backtrack between pages of) images than in conventional search engines.

I have spent a considerable amount of time developing in both Objective-C and in JavaScript, and Cappuccino's feel leans very strongly towards the former. It's not just the syntax, but Cappuccino has captured the feeling of Cocoa development as well.

That isn't to say that its a bad experience, but programming in Objective-? rarely feels like a matter of ingenuity, instead it is a matter of correctly matching premade patterns to problems. Sometimes you jiggle the pattern a bit to make it fit correctly, but its rare to get particularly meta or to pull new tricks out of your bag/

At the same time, there are a few places in Cocoa--and in Cappuccino as well--where there is no premade solution, and improvising new solutions tends to involve all manner of trickery and disregard for propriety. Essentially, you meticulously design the first 97% of the application, and then beat the hell out of it for the final three percent until it works exactly how you want.

Another similarity in the Objective-? languages is the long but not-particularly steep learning curve. Early on, after every Cocoa program I would write I would figure out how I had poorly designed it to take advantage of all the Cocoa goodness. Then you throw your application out and redesign it, and the code is half as long, cleaner, and more intuitive.

After finishing Mahou, I had the same damn feeling: I could rewrite it in half the time, with a more extensible design, and less hackery. This is the frustration of using a heavy framework, which are inherently heavily opinionated, and will subtly punish you for making the wrong choices until you learn the framework well enough to anticipate its quirks.

Although I was occasionally stymied along the way, I tremendously enjoyed developing my first Cappuccino application today. I really got into the flow of it, and the overlap with Cocoa programming is remarkably high. There were a few places where JavaScript knowledge was helpful, but my personal impression was that an experienced Cocoa programmer would be more at home than an experienced JQuery programmer. Both would certainly pick it up with a bit of effort.

In all fairness, the current iteration of my app is not an application that plays particularly well to Cappuccino's strengths, but Cappuccino helped facilitate some fun functionality, and when I have time to implement the entire Mahou vision, I believe it'll be a slightly more worthy project.

Head over to Cappuccino.org and give it a whirl.