I’ve been wanting to spend some time trying out recent developer and infrastructure tooling, starting with taking Tailscale for a spin (it’s quite nice). Next, I’ve been thinking about replacing Google Analytics on this blog for some time, and decided to try out Plausible.io as a replacement.

For the record, I don’t have any profound gripes with Google Analytics, rather I’d say that I’m profoundly grateful to GA. It’s a tool that I’ve greatly benefitted from over the past decade, and it hasn’t charged me anything for it! That said, my personal experience is that GA’s user experience has degraded as the friction between consumer privacy (especially in EU) and cookie based analytics have increased. Since the forced move to GA4, I’ve essentially stopped looking at Google Analytics because the default views are less helpful for me, I lost my custom views from GA3, and I’ve found it harder to configure to my liking.

Overall, Plausible has a great onboarding experience, is slightly overpriced as a consumer product but underpriced as an enterprise product, and I’ve enjoyed using it. For the time being, I’ve switched off Google Analytics and moved to Plausible, which I imagine reevaluating after a month or two of additional usage. I appreciate the privacy-forward approach here that should avoid having to migrate to yet-another analytics service as privacy laws continue to ramp up over the next few years. At this point, I don’t think it’s viable for most businesses to switch over given the inability to connect these analytics to advertising data, and are missing a few core features (SSO, something like SOC2, etc).

Plausible is basically a prediction that Google Analytic’s data-aggregation strategy, and in particular using GA to facilitate increased Google Ads spend, is going to be rendered less efficient by ramping up privacy regulation. This seems like a good thesis to me, and ties into my general thesis that compliance is eating the world. Conversely, I think Plausible could do more to explain why they are great in general, rather than focusing on not being Google Analytics (there are a lot of companies out there that aren’t Google Analytics). I think the reasons are there and fairly compelling (hosted in EU, not venture funded, open-source, etc), and that it’s more of an empphasis issue in marketing than an actual gap. (Although I’d love to see more emphasis on the specific technical solution to tracking.)

I think this is largely a function of the growth model, with Plausible aiming to start down-market with creators and startups. There’s a significant gap between the current offering and what would be needed to successfully pursue scaled companies, particularly integration with advertising (arguably Google Analytic’s most important feature to most companies), US-based compliance regimes (e.g. SOC2) and SSO. It’s possible SSO is hidden somewhere, but I do think it’s a fundamental security feature, and would love to see a security and privacy minded tool offer support. (Their Data Processing Agreemenet is an interesting read.)

Plausible is open source software, meaning that you could theoretically run it yourself. Of course, actually running a high-performance, tuned analytics setup is not necessarily the sort of thing most companies should invest time in, but it does provide an exit if the hosted version became prohibitively high. Altogether, I think this is a pretty smart move, and the AGPLv3 is a good license selection (as they discuss here). 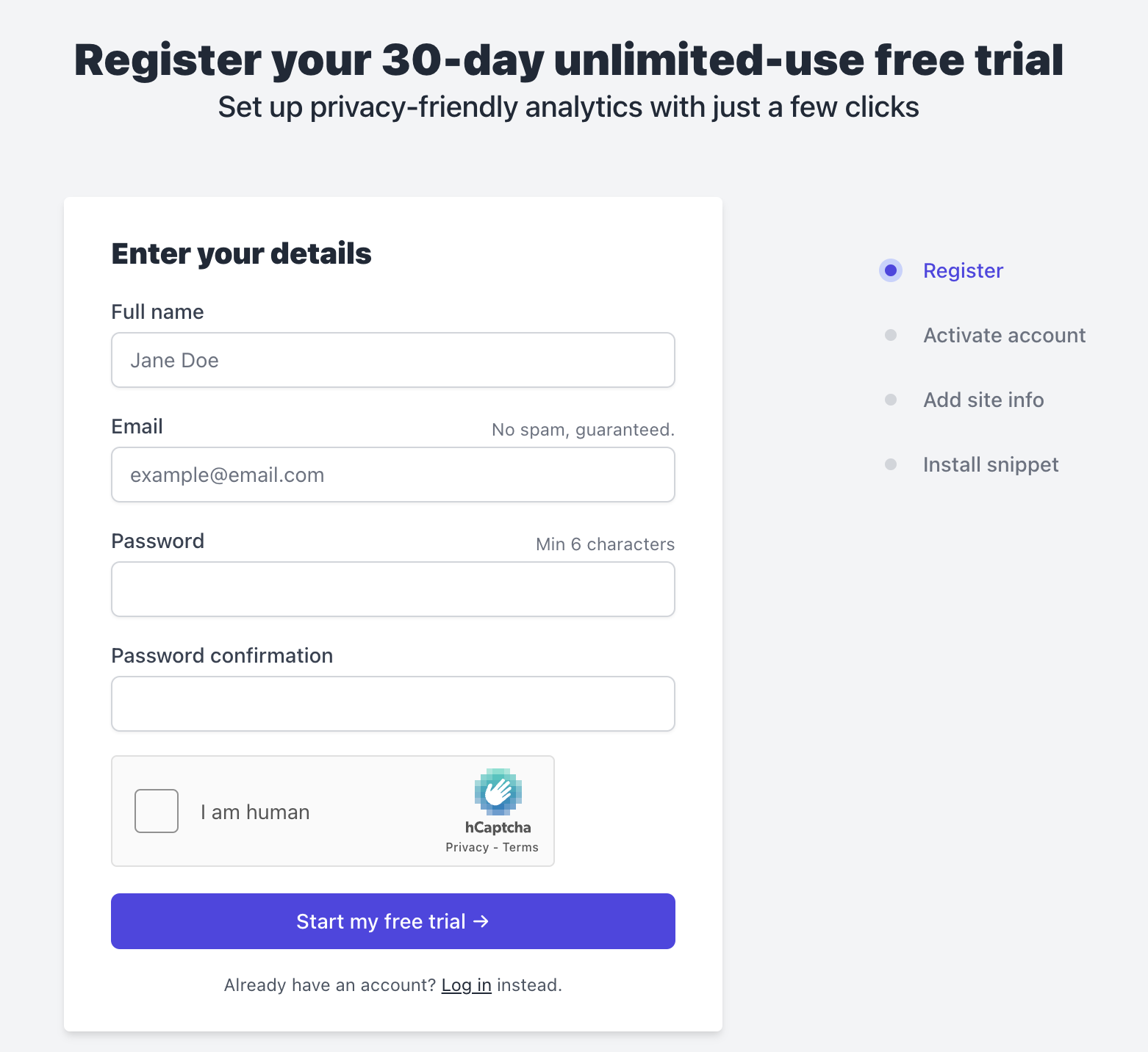 The signup process starts with enter email and password on first screen, and then confirm your email address. 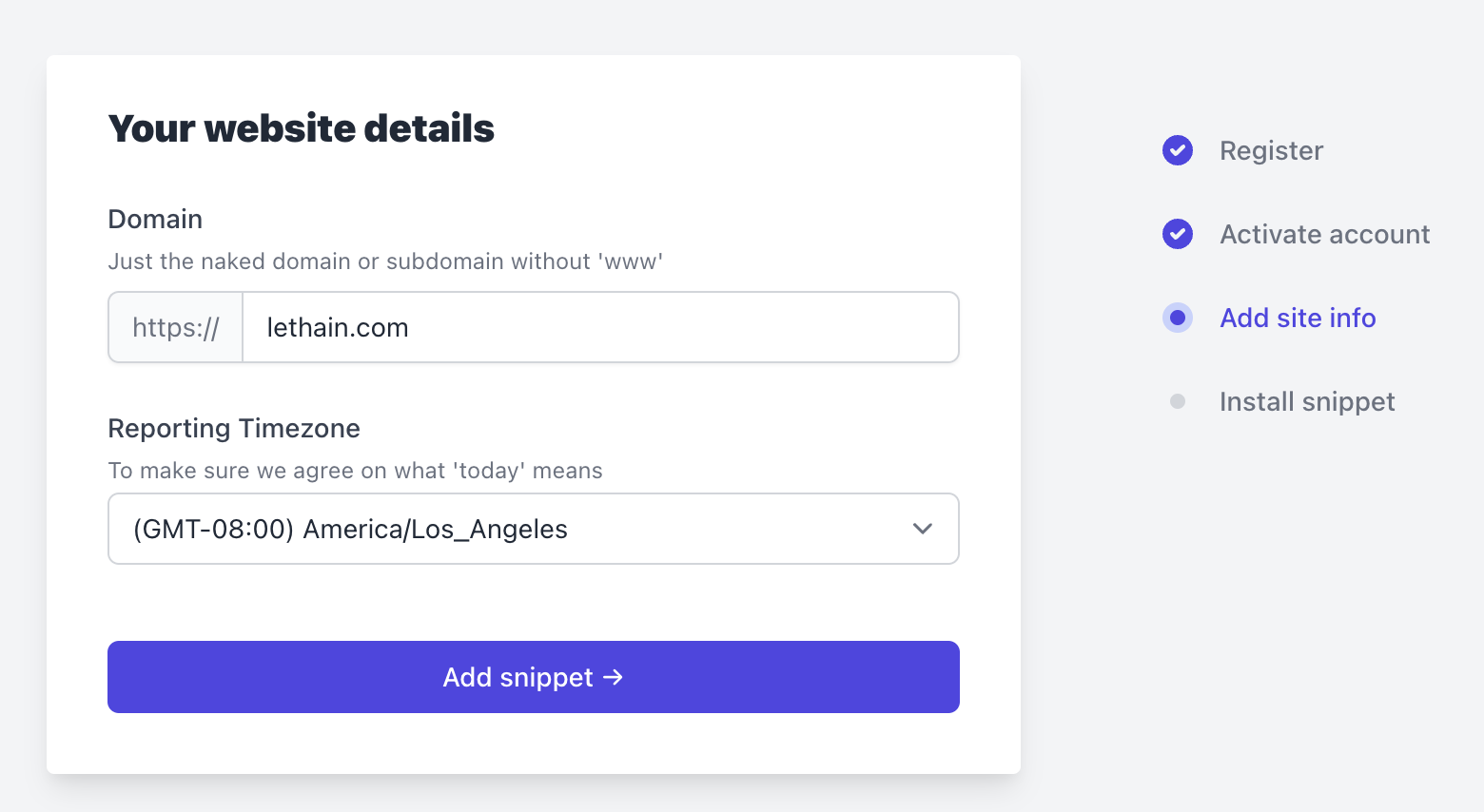 This is followed by a very short installation screen, instructing me to add a simple script to my head tag.

My blog uses Hugo, so I updated the partials/head-additions.html to look like this:

Finally, I removed my Google Analytics keys from config.toml, commit the changes, and pushed them out.

Throughout my onboarding and early usage, I had a handful of small ideas of how the experience might be adjusted. Caveats abound: I have not dug into the codebase, these are matters of opinion, etc.

Plausible’s approach to analytics is basically: keep is simple. Quoting some of their marketing copy:

Plausible Analytics is built with simplicity in mind. Anyone can understand all the metrics we present at a glance and without having any training or prior analytics experience. Everything you need to know is on one page.

This approach is consistently implemented, as you can see from looking at their screens.

They additionally show users grouped by source, page, geographic location, and device. Seeing as these are the only pieces of data collected–along with metadata from the request itself that is used to fingerprint the visitor and build sessions–there’s simply not much else that they can show.

Within that constrained scope, I think the UX is quite good. For example, I particularly appreciate that it only takes one click to filter traffic to a single page (or source, or device), making it possible to quickly answer questions like, “Where did traffic for this particular page come from?” This is very doable on Google Analytics, but it’s easier to get to here.

Pricing is slightly higher than I’d like for a personal product, but very cheap for an enterprise product. It’s hard to guess how many pageviews a given analytics provider will say I get, but I’m guessing 100 to 200,000k pageviews each month, so roughly $20-$30/month. There’s a 30 day trial, so I should be able to get a sense of actual pricing before making a final purchase decision.

Without claiming any sort of robustness, my observed latency for Google Analytics was around 120ms to complete, whereas Plausible is closer to 180ms or so. Increased latency makes sense if Plausible is hosting all servers (excluding, presumably, a CDN for the javascript) in the EU as they claim (roughly 90ms roundtrip from US to EU versus <30ms from San Francisco to a nearby Google datacenter). That is with locally cached script, without there’s an additional ~80ms of latency for loading Plausible’s scripts, and a somewhat shorter one for GA. GA is, of course, far more likely to already be cached on any given machine. Altogether, I think it’s fair to say that Plausible is about twice as slow as Google Analytics wrt time to completing the first event on the average website.

Still, even twice as slow isn’t bad at roughly 250ms. In either case, I think this is a reasonable latency given page load isn’t blocked behind it.