We’ve been working on the reflect Slack application for a while, and it’s almost done. We just have to make it possible for other folks to install it. The golden standard of distribution is Slack’s App Directory, which makes it easy for folks to find and install your app.

We won’t quite get our toy app into the App Directory, but we will make it possible for other folks to install it into their workspaces, at which point you could submit it to the directory if you wanted.

We’ve already done quite a bit, we just need to integrate with Slack’s OAuth implementation to get workspace-scoped OAuth tokens and update our API requests to use those tokens instead of the hard-coded tokens we’ve used thus far. Hopefully this is easy…

To distribute a Slack app, there is a helpful checklist in the App admin. Google Functions are run over HTTPS, so we already have that covered. You might consider LetsEncrypt if you’re using a different host and need free SSL. 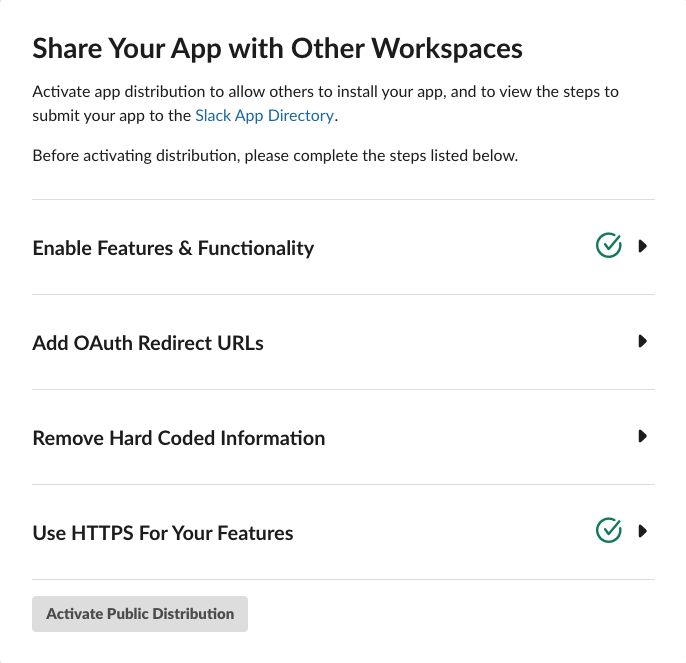 We’ve also already enabled quite a bit of functionality over the course of the series, starting with the Slash Commands, App Home, some Events, and so on. So we’re good there too.

The remaining two are Add OAuth Redirect URLs, which we’ll get into next, and Remove Hard Coded Information. The later is just a checkbox asserting that you’ve done it, but… we haven’t done that yet since we have a bunch of tokens in our env.yaml, so we’ll come back to that after finishing the OAuth flows.

To integrate with Slack’s OAuth, we’re going to need to:

There are a lot of details to keep straight here so it can get a bit confusing, but fortunately the actual code we need to write is on the simpler side. Onwards!

We’re going to create a new Cloud Function that will handle the redirect. We’ll start by updating reflect/storage.py to support storing the retrieved tokens.

I love that we can just shove the JSON response into Firestore without deconstructing it. Admittedly, we might want to be a bit more careful in validating the contents in a production application to guard against future changes to the data format.

Then we’ll update reflect/api.py to support calling oauth.access which requires a slightly different format than the other two API integrations we’ve done so far.

Then we’ll update reflect/main.py to add the new function oauth_redirect which we’ll turn into a Cloud Function in a bit.

For this to work, we’ll need to add SLACK_CLIENT_ID and SLACK_CLIENT_SECRET to reflect/env.yaml. Those values are in the Basic Information tab in your App admin.

Note that you’ll need to wrap your Client ID in quotes because otherwise Cloud Functions will attempt to treat it as a float, which will fail.

Then deploy our new Cloud Function so that we can get its URI.

Next up, registering the URL.

The URL we got when creating the oauth_redirect endpoint will look something along the lines of this.

Now we need to go to the App admin, navigate to OAuth & Permissions on the left nav, and go to Redirect URLs. 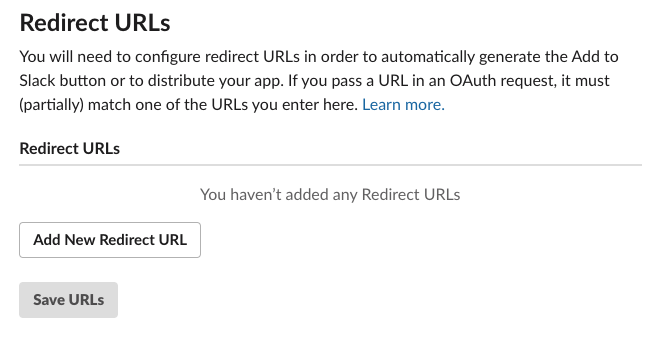 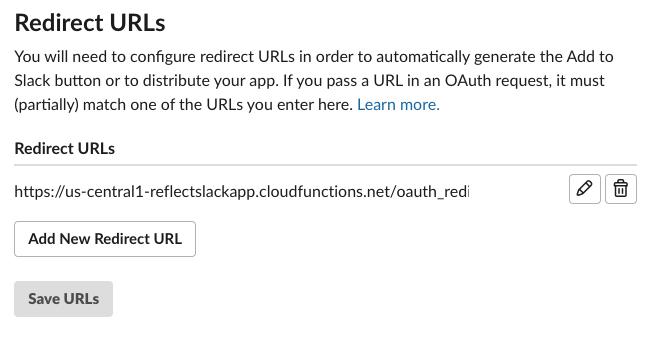 To authorize folks, we want to redirect them to

We need to include two GET parameters: (1) client_id to identify our application, and (2) scope of requested permissions required by our app. There are additional parameters you can send, documented in Using OAuth 2.0, but which we can ignore for now.

There is also a streamliend approached called Direct Install URL that is available for applications in the App Directory, which unfortunately is not us. Further, you can’t get into the App Directory until you’ve integrated this OAuth flow, so there’s no skipping these steps.

Let’s start by constructing this URL by hand.

First we’ll grab out client_id by going into our App admin, selecting Basic Information on the left navigation, and scrolling down to App Credentials.

Then in App admin we should go to OAuth & Permissions and note the four scopes we’re using:

Taking all of these, we can generate the authorization URL.

Also note that you can get this generated for you by heading over to Manage Distribution in the App Admin now that you’ve added a Redirect URL (it doesn’t show up until you’ve added one). It’s pretty nifty, autogenerating an embeddable button for you, as well as the authorization link for your app with the correct scopes.

Now that we have our authorization URL, paste it into your browser and it’s time to see if it actually works. 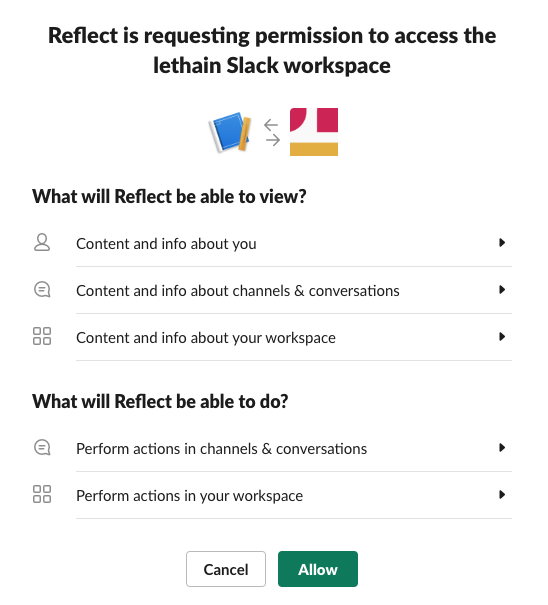 Click Allow and it’ll redirect to our handler above, and then you’ll see a mostly white webpage with the text OK. Long term, you’ll likely want to redirect the user somewhere more helpful through a 301 response to our oauth_redirect Cloud Function. Slack recommends using their deep linking.

If we head over to Firestore, we can verify that we captured the data we want. 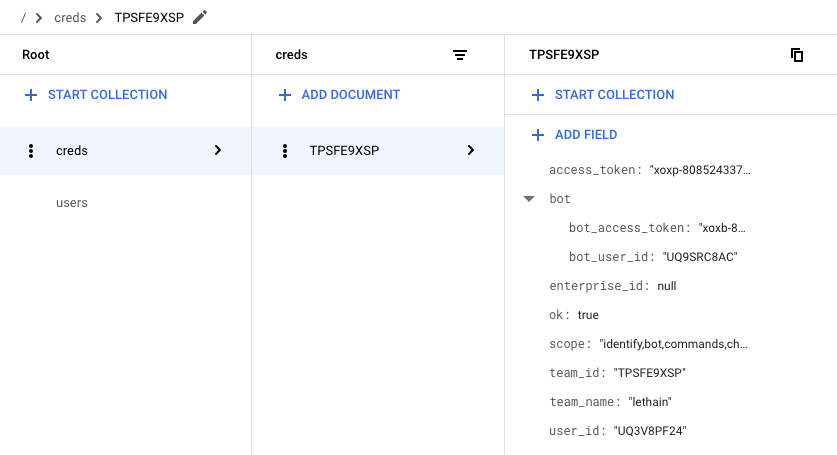 We did, which is quite exciting: we’re almost done with our OAuth integration. We just need to update our calls into the Slack API to use these retrieve tokens instead of those we’ve previously hardcoded.

We’re capturing OAuth and bot tokens from the OAuth authorization flow, so the first thing we should do is delete our hardcoded tokens in our reflect/env.yaml file.

Then we’ll add a function to reflect/storage.py to retrieve our credentials.

There is one minor caveat, which is that retrieving these tokens requires threading the team_id into each of the function calls that query the Slack API. This requires refactoring reflect/events.py a bit. Fortunately team_id is included in all the events that we’re subscribed to, making it easy to thread through.

Afterwards, deploy the latest version of dispatch, and it should work. Verify by testing our /reflect, /recall, visting the App Home, and using a reacji.

Assuming everything above worked, then head back to Manage Distribution, scroll down to Remove Hard Coded Information, and confirm that you have.

At which point the Activate Public Distribution button will enable, which you should click. 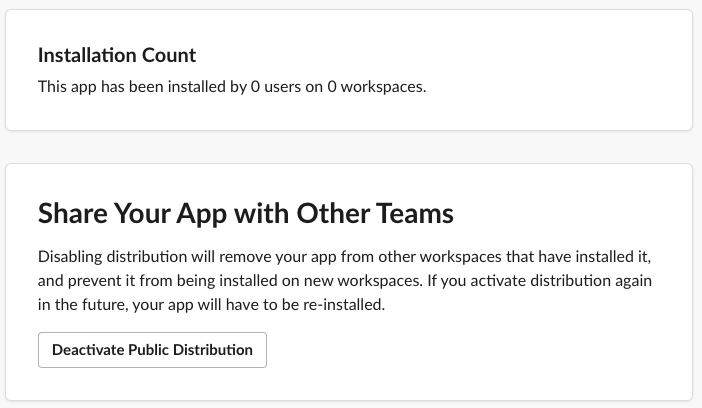 After enabling distribution for your app, you’re able to see your installation count, disable distribution, as well as enter a workflow to submit your application to the Slack App Directory, most importantly though: if you share the authorization URL with someone, they can install your app.

Another way to say this is: we’re done!

Over the course of these five entries, I’ve gotten to spend a good amount of time with both Slack’s API and Google’s function-as-a-service offering, Cloud Functions. Both were moderately delightful.

I started this series with the hypothesis that building an application on Slack’s platform would be easier than building a comparable web application. At the end, I think that hypothesis held true for this project. Starting up new projects requires a tremendous amount of scaffolding, and Slack has done a phenomenal job of providing quick-to-implement interfaces that absolve you from writing scaffolding, even if you eschew their Python SDK and write raw integrations, which I did to learn more about the underlying APIs.

You could argue that SDKs are the real interface for modern APIs, because the vast majority of integrations go through language specific SDKs rather than generating raw API calls, but I’ll leave that argument for a different post.

Slash Commands are very comfortable for me with a text-based past, and I’m curious if others are equally comfortable with them or if there is something of an split between folks who grew up using IRC and folks who did not. I do think there’s a clear argument for Reacji as modernized Slash Commands with better discoverability.

Overall I think reacji-as-user-interface is a particularly fun and interesting area to explore in Slack applications, and I imagine Slack has some pretty powerful data on usage patterns. One nit is that I wish I could filter incoming reaction events based on the specific reactions, e.g. only get events for the :ididit: reaction instead of having to filter out all of them. The volume of irrelevant reactions is so much higher than the volume of reactions any given app would care about, and skipping out on that network traffic seems ideal.

The two areas where the Slack API and platform feel most like a work-in-progress are (1) constrained expressivity and (2) API inconsistency.

When I started formatting the list of completed tasks, I ran into an interesting problem: neither Block Kit nor mrkdwn support lists. Instead you can create a sort of raw Markdown-ish list by shoving each item into its own paragraph, but it’s not quite right, and it’s even further from a Dropbox Paper-esque dynamic, shared checklist. Often genius comes from constraints, and Slack’s constraints in expression are driving innovation like reacji, but it remains true that a web or native application has a stagger amount of flexibility to express its ideas, and today Slack apps do not.

It’s the natural state of long-lived platforms to end up with some inconsistency in their APIs, and Slack shows a fair amount of their evolution in their API. It’s also the case that the consistency of their API design is constrained by the inconsistencies in web standards: Slack can’t make the OAuth flows consistent with their Events API, because the OAuth flows are an aging standard they must adhere to. This essential inconsistency required by implementing web-standards while also offering modern API behavior is a real challenge, and SDKs are really the only path around it, which Slack is certainly doing.

Overall, I think the completeness of the Slack platform and ease of building on it is quite exciting, and I can only imagine where it’ll be in a few more years.

Developing on Cloud Function was the lowest overhead project scaffolding I’ve experienced, allowing me to get started almost instantly. Running Python servers is particularly annoying–I’ve spent enough time configuring uWSGI, thanks–and I got to skip all of that and just write the application-specific code. Adding requirements.txt dependencies worked as expected, copying files in directory for extra data worked as expected, being able to pass in environment variables worked well, etc.

Cloud Firestore was also surprisingly easy to set up and use. The query patterns are very constrained, but as a document store that takes no administrative overhead to setup, it just worked for this usecase. I have so many toy projects that I never operationalize because dealing with storage is a pain or expensive, and I think many of those projects might be going into Firestore in the future.

The biggest gap in Cloud Functions as they stand today is that it’s surprisingly hard to put them behind a load balancer without writing your own software, which is straightforward on AWS. This might not be necessary for autoscaling purposes as the function scheduler is an orchestration system in its own right, but it is necessary in terms of getting behind a single SSL connection, being able to multiplex requests across multiple resources on one HTTP/2 connection, presenting a professional veneur of running behind your own domain, and to have a clean interface behind which you could shift your implementation over time.

Altogether, I really enjoyed this project and particularly it reminded me how joyful it is to write small-scale software in Python. I hope these notes are useful to someone, and drop me a note with your thoughts.