I am sitting in my apartment, in my rural home of Kamioka, and ponder returning to work tomorrow. Christmas vacation was good for me. Two weeks spent traveling, cooking, and relaxing (which mostly included sleeping, programming, and reading). 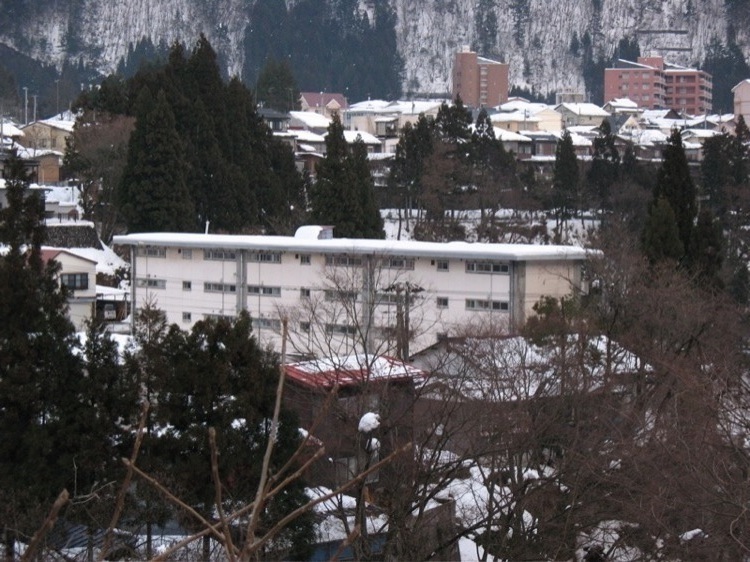 The large and not-that-particularly-pretty building near the front is the apartment building I live in.

I've been in Japan since July 30th, so I've been here for a bit over five months now. During that time I've been working as part of the JET Program as an Assistant English Teacher. Its a strange job. I don't really like it, to be honest. At times I wonder, and I think that most if not all other ALTs occasionally wonder the same, about quitting and going back home.

Early on I was learning things constantly, and I still am learning things now, but they are composed of a different material. This has been my first long-term employment, and my first time supporting myself. There is a lot to learn in these situations. Paying bills for the first time in a language I am effectively illiterate in... being an unwitting pawn in office and regional politics. It was all new five months ago, and maybe calling the experience staggering isn't completely for dramatic effect, but may instead be a fair description. That newness meant I was learning big things, macro-topics that will relate to the rest of my life.

Now I am learning more detailed and specific realities about the region I am in, the coworkers I work with, and the profession of teaching English poorly. I'm not callous enough to say that these things are unimportant, but I don't think they relate to my future in a meaningful way. Every experience you have will at some point serve as a fount of wisdom, but not every experience will serve in equal capacity or frequency.

So, I feel that the next six, perhaps six and a half, months are ones that I am spending poorly. I can partially justify this as saving money to support myself as an independent programmer when I return to America (more on fiscal matters in a bit), but I am getting paid about $14 or 15 USD per hour (without factoring in expenses, commute time, non-voluntary and uncompensated 'volunteer' work on weekends, etc). So that line of reasoning is not particularly potent.

Instead, I am mostly still here out of a sense of obligation to the people I am working with. I genuinely like my supervisor, and I get along with the English teachers at my middle school. There are a few other bright spots. I wouldn't want to inconvenience these people. In some ways this is simply another excuse, but its also very much the way I am wired.

There are a lot of negative things I could, and occasionally do, voice about my job here, but I have tendrils of suspicion that inconveniences will exist no matter where I happen to be. At this point I am accepting my job for what it is, and trying to make it as unpainful for myself and those around me as possible. When I can leave quietly, I most certainly will.

In a genuinely sad way, though, I am determined to leave just as I am finally gaining enough perspective to do perform this job coherently. This seems to be a trend in Japan where workers are stuffed into job positions they are not trained for. Case in point: my supervisor is a junior high school teacher who was assigned to handle all JET affairs and the school system's computer and technology needs.

The State of What Is

What is more important, though, is that I am starting this new year in a good place. A better place than I have ever started a year.

Physically I feel more fit than I can remember. I have been plagued by injuries for the last few years, but my body has recovered from most of them. I have been eating food that I have cooked, and its allowed me to control my diet in a way I've never been able to before.

Financially, I have been able to save more money than I would have reasonably expected. Living in the rural countryside my expenses are quite low, and I'm saving about 60% of my income. Thats despite paying a $1000 USD tax for my car, and spending around $1000 USD during winter vacation. I spend a lot of money on groceries, but its just remarkably cheap living out here (caveat: unless you go drinking).

I'm in the best relationship of my life, I found one of my favorite cds I've ever heard, I'm programming as much as I can. Things are going well for me.

I am definitely looking forward to a time where I wake up in the morning and work on something I enjoy. I don't wake up with a lot of passion for the approaching day, its usually either apathy or stress. But I'm pretty well resolved to make the best of the next piece of my life.

Its going to be a good year.