One of the eternal debates about server setup is between the multi-server and single-server configuration for serving dynamic web applications. 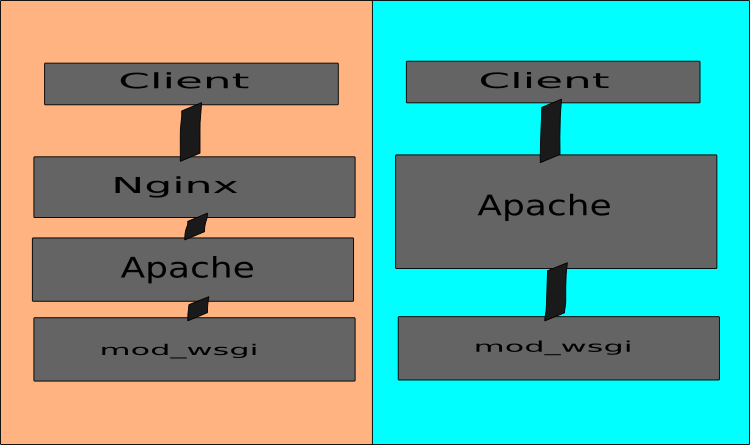 I decided to run some performance tests in an effort to throw some numbers at the discussion.

These conditions should represent the perfect storm a single server setup to outperform the multi-server approach.

Initially I choose to evaluate results in terms of transactions per second. A brief snippet of results will explain why that was a rather dull proposition.

In terms of transactions / second, the difference in configurations (and enabling debugging, and hitting the database) had virtually no impact. Back to the drawing board.

My second approach was to compare time elapsed to server all requests. Unfortunately, elapsed time and transactions per second are calculated from overlapping data, so the differences between the two setups were essentially the same. Sometimes the multi-server setup outperformed the single server performance. Sometimes the single server setup outperformed multi-server performance. Nothing conclusive.

This trend continues throughout all of the various metrics recorded by the load-testing. Perhaps more divergent numbers could be achieved by averaging the three runs instead of taking the best value. That said, even obsessively seeking out a preference between the two in these conditions will only discover a minimal preference one way or another. For someone who views performance as a piece of the puzzle--not the puzzle itself--the value of such a data point is virtually moot.

I'm curious to see these tests replicated and done with increasingly interesting comparisons (Nginx and `mod_wsgi versus Nginx and fcgi versus Apache and mod_wsgi, etc), and possibly even this experiment itself repeated on the chance that I performed some egregious error and these numbers were in some way invalidated.

For the time being, my conclusion is that for serving dynamic content in good conditions, performance is roughly equivalent for both the single and multi server setups.

The raw data can be downloaded here in CSV format.

Here is the script that I used to isolate data on one metric (concurrency, time to complete, etc), pick the strongest value from the three equivalent runs, and then spit out a CSV file.