I spent a lot of time in my kitchen, so I perhaps I can share some clues to my life and personality through a quick tour of my kitchen. It is a standard Japanese kitchen, which means it is lacking certain conveniences like an oven, but all in all its a decent setup.

Although, I must say, a bit lacking in counterspace. 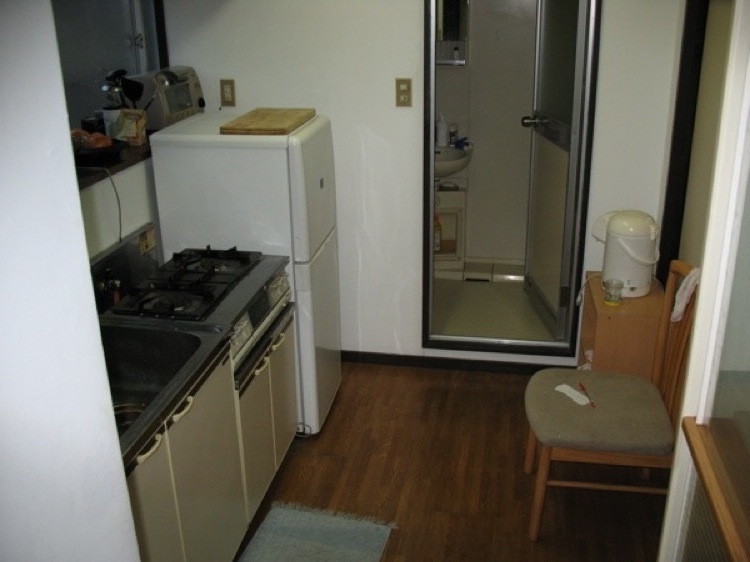 This is what it looks like to walk into my kitchen from the front door. Admittedly it might be slightly cleaner in this picture than it usually is... but you get the idea anyway. The shower and bathroom are connected directly to the kitchen, the toilet roomt is right next to the picture-taker, and the living room is to the right, next to the chair you can barely see.

Although we'll look at them a bit more indepth, an overview of the kitchen is: a two burner gas stove (which also has a small drawer for doing fish), a flat toaster-like contraption that could also be used to grill/cook some foods, a handy drying rack, a goodly amount of cabinets, a sink, a moderate sized refrigerator, a small electric water heater, and a large gas hot water heater which is connected to the sink and the bathroom. 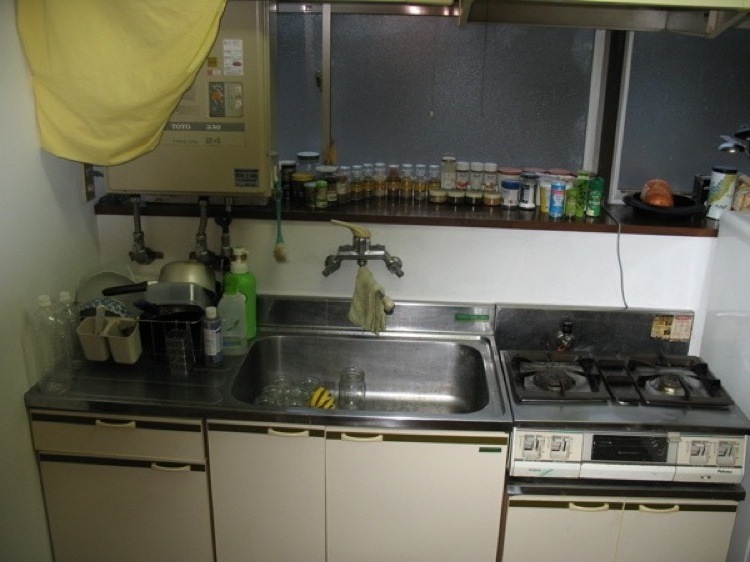 Here is another view of my kitchen. The gas water heater is the large ugly box in the top-left corner. On the ledge next to the windows are a pretty wide variety of spices and other kitchen utility items. I actually inhereted most of the spices from the predecessor, so I can't take any credit for the collection. 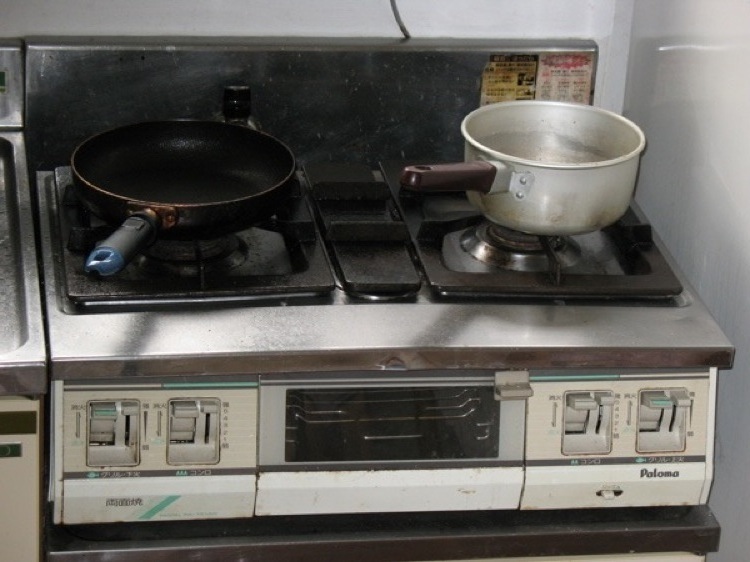 Lets start with the forge of my beloved stirfries: the stove. It is a very handy stove, but there isn't a whole lot to say about it either. It gets the job done. Its definitely old, but still in perfect working condition (though at this point it seems a safe bet that no quantity of elbow grease will restore that just-bought sheen). 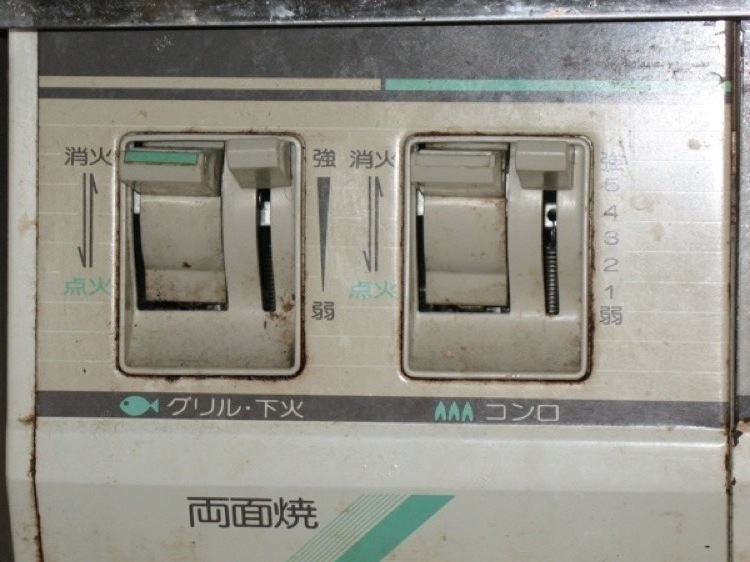 To release the temporarily restrained fire spirits, you pull down the thick and thin switches simultaniously (you'll have to turn the gas on first though, see below). You'll have to hold them down for a few seconds until it will stay lit. You'll notice that there are two pairs of switches on the left, and two pairs of switches on the right. On each the right and the left one of the pairs will be labelled with a small fish, and that is the control for the small cooking shelf inside the range. I haven't made any use of that, but it appears to work. 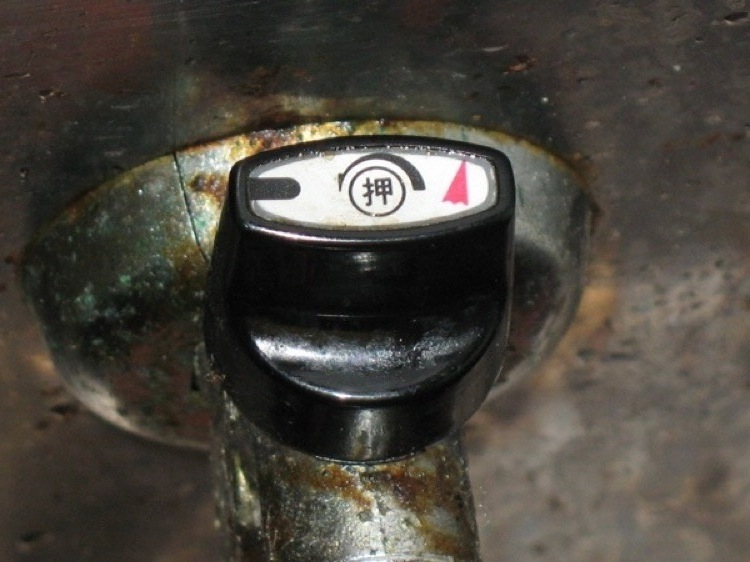 This is the handy nob that is used to turn on the gas for the stove. My mental process is that if the handle is parallel to the gas-line then it is an open door, if it is perpendicular than it is a gate blocking the entrance of the gas. Simple enough. I usually turn it off unless I am actively using it. Too many lectures concerning earthquake survival to not spent the extra second to turn the gas off. 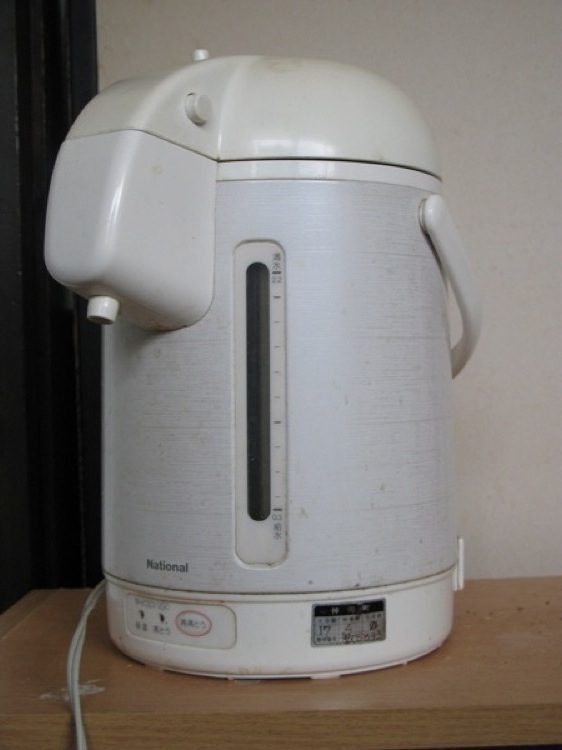 Here is my electric water heater. I use it at least twice a day to eat water for tea. It takes maybe five or six minutes for it to boil the water if it is filled halfway. It is a little bit excessively beeply, but it was also inhereted from my predecessor, and it works well. 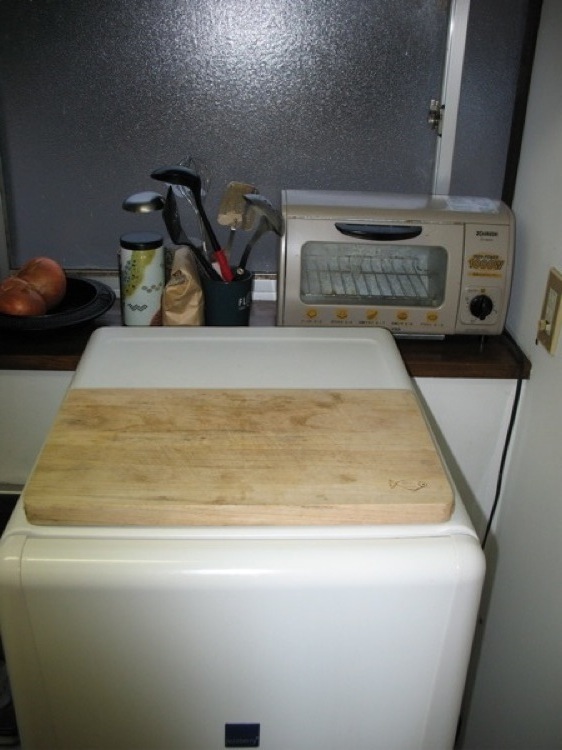 In this picture you can see the general-purpose toaster. Its pretty handy, although I can only find plain white bread here, so I haven't really been making that much use of it. You can also see some of the random kitchen implements that have been collected. The two tall circular containers next to the kitchen implements are full of tea leaves. 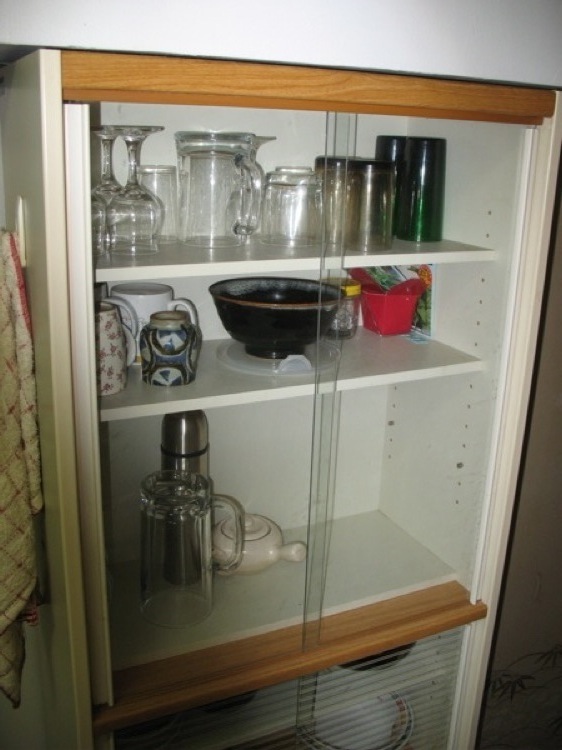 Here is an exciting shot of some of the glass wear in the kitchen cabinet. 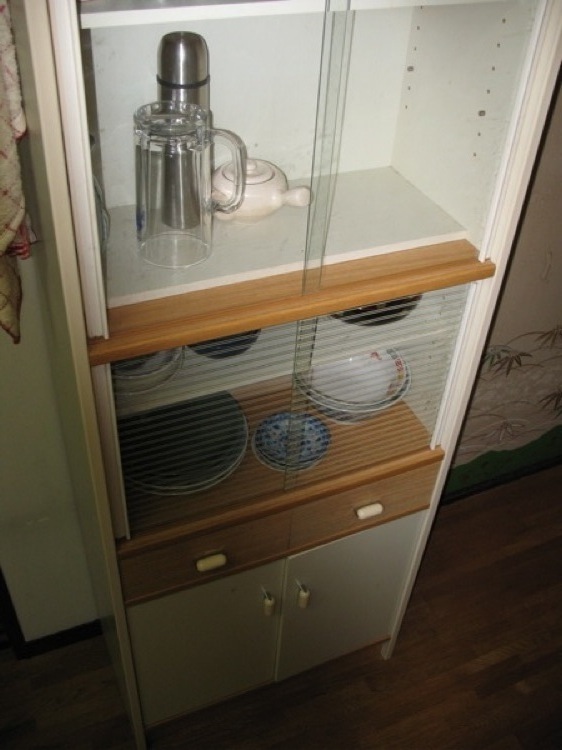 And an equally intriguing, but less helpful shot of some of the plates and bowls. The most notable aspects of the bowl collection are that two of them appear to have been acquired from the school lunches (not by me!), and that Amy's predecessor--from outside Kyoto--happens to have bough the same exact set of ceramic bowls as one of my predecessors did (its hard to say who, since ALTs have been acquiring material possesions in this apartment for the last two decades). I guess they were on sale at some point.