I recently asked an engineering manager candidate why she was considering leaving her current job, and she said something unfortunately relatable: her infrastructure engineering team had a great deal of work left to do, but no headcount available to do it.

Such is infrastructure as a cost center.

On the other hand, at quickly growing companies, I’ve also seen infrastructure teams become befuddled about their priorities and staff multiple, competing teams with the same goals. Or worse, staffing competiting solutions to one problem, while not staffing their most urgent work at all. In such circumstances, critical production systems continue crashing, surrounded by heavily staffed glamour projects with unclear goals.

Such is the ego trip of infrastructure.

Although the perils of both extremes are fairly clear, finding a grounded thinking framework for prioritizing infrastructure remains challenging. Sufficiently challenging, that over time I’ve put together a thinking aid to help me prioritize incoming requests and determine which projects I should proactively initiate myself. 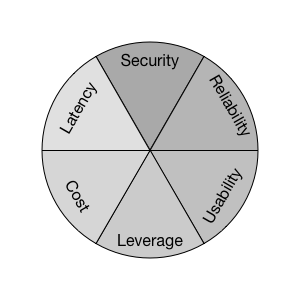 Intended usage is to think through your current offering, incoming feature requests and potential capabilities: for each, look for opportunities across each of these six dimensions. These are presented in loose priority ordering, although certainly your priorities likely aren’t exactly mine.

Infrastructure offers these six major features to company and client:

This is certainly not a comprehensive framework, but I have found it to be quite useful during planning sessions. In particular, I find it useful for avoiding some of the frequent mistakes made by infrastructure engineering teams:

By systematically thinking through the six features during planning, I find it’s harder for me to fall into those alluring mental traps.

I’ve been using a loose approximation of this for the past six months or so, and have been pretty happy with it, although only in writing this post was I able to tease apart the nuance betwen usability and leverage, and I’ll undoubtedly keep iterating on it indefinitely. Do you use anything similar? How do you avoid falling into the common traps of infrastructure planning?