When I wrote about the public cloud evolving the role of infrastructure engineering, I sort of imagined that the precursor question–should we run our infrastructure on the public cloud?–was already quite settled. Unexpectedly, it’s a discussion that I find myself having more rather than less frequently each year, so I’ve taken some time to structure and document my thinking.

In short: run on the public cloud unless (1) it prevents you from executing on your core competency or (2) your workloads are expensive and require a specialized hardware profile that doesn’t align with the general purpose computation favored by the public cloud’s economics.

Structure here is (a) start with a review of advantages of both datacenter and public cloud approaches, (b) follow with a review of how some modern companies are approaching this problem, and (c) then end with how companies should make this decision for themselves.

Running your own datacenters is good for:

Running in the public cloud is good a for:

It’s easy to get overly abstract when talking about “the right way” to do something, so before jumping into decision criteria, it’s useful to look at what companies are actually doing:

My recommended takeaway here is that a lot of companies are doing different things, and there is no single dominant strategy that you should take in every every scenario.

Okay, so we’ve identified that there are very successful companies operating exclusively on the cloud, almost exclusively off the cloud, and running hybrid approaches. Every approach is valid.

What should you do?

Economies and diseconomies of scale 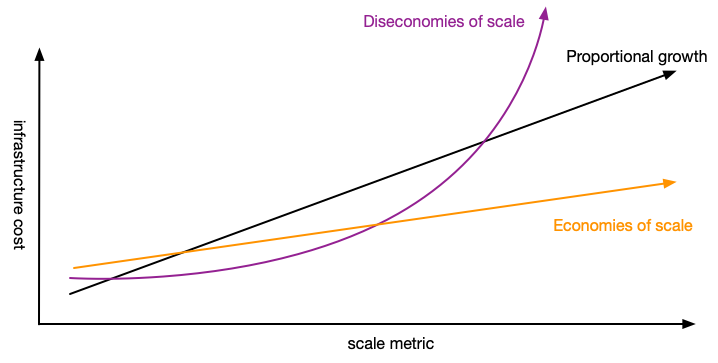 Generally, you should optimize for growth as long as you’re benefitting from economies of scale or are scaling costs proportionally. If you’re getting less efficient with scale, then your growth is strangling your business, and you should prioritize costs.

Similarly, if your business is not growing, then reducing your absolute costs are more important than their relationship with business scale, and you should consider prioritizing costs, especially if there isn’t alternative work you can do to initiate new growth.

If one of those is true (you have diseconomies of scale or your business’ growth has slowed), then you likely want to be focusing on costs, and moving away from the public cloud to your own datacenters is a viable strategy to reduce those costs.

That said, you should still follow the first law of optimization: optimization where there’s the most room for improvement. If there are other areas where you’re spending more (or spending less intentionally), focus there first.

Every strategy to reduce cost shifts energy away from growth.

Many cost strategies can be contained within a small number of teams, allowing you to make a fixed investment into reducing costs (some examples here are improved efficiency in your orchestration tier, improvement to your storage implementation). It’s easy to make a cost versus investment calculation for these sorts of efforts. (Roughly, if you’ll save more money than you invest, then grow team to support the efforts.)

Other cost strategies require tradeoffs against developer productivity or product development, and these are much harder to make. The principled way to make this sort of tradeoff is to consider the discounted cash flow between the different scenarios.

I believe moving off the public cloud is in the second category.

The optimal solution will depend on how you model the cloud’s productivity benefits, but generally I think discounted cash flow analysis will argue for staying on the cloud unless (a) you have specialized workloads that support significantly greater than 30% savings over the public cloud or (b) you have dismal expectations for future growth.

If your ability to execute on your core competency is constrained by the public cloud, then you may want to run your own datacenters (e.g. Fastly, Dropbox).

However, if you’re small or are spreading yourself across many directions, then you’re unlikely to outperform the public cloud in the long run. If you’re running a general purpose infrastructure (e.g. Pinterest, Lyft), then you’ll likely benefit from running on the public cloud.

So far we’ve thought of this mostly as a decision you make at the company level, but as you get large enough that doesn’t have to be the case. You could start new business lines in the cloud to optimize for growth, and move your mature business lines (where growth has slowed down) into datacenters to optimize for efficiency.

Once a company reaches a certain size and age, I suspect this is the mathematically optimal approach.

Focusing on either datacenters or the cloud is a somewhat trapdoor decision. You can evolve your strategy over time, but each time you shift direction you’ll lose some of your expertise, and if you shift direction frequently you’ll lack the expertise to excel in any approach.

For those few businesses, investing into their core competency makes them more valuable and defensible, but for most folks, it’s just a tar pit.