When finishing up a difficult project, I sometimes pause to dream about how it’ll nudge my career forward. My thinking advances down the storyline of “If I bundle this project with a few others, mix in good team health, add a dash of time for the flavor to deepen, and undoubtedly this will get me to the coveted next level.”

Then I’ll take a few minutes to savor the future.

Dreaming about my career, it’s always about the next step forward, operating from the baseline assumption that progress is inevitable. However, in the fast-growing companies I’ve worked at, this hasn’t always been the case. The opportunities arose, but the folks currently doing the work often didn’t receive them.

As a business' complexity rapidly grows, folks in important organizational roles often struggle to learn quickly enough to remain effective in their current roles. In such cases, opportunities moved on to someone else who was currently available, often someone newly hired into the company.

The difficulty of retaining your role during rapid growth is usually discussed in hushed tones filtering out from dark corners, but there are some straightforward steps you can take to raise your chances of growing successfully alongside your role’s complexity.

From learning to experienced

As you learn, you become experienced at more and more tasks, shrinking the learning bucket, and making you more effective in your current role. 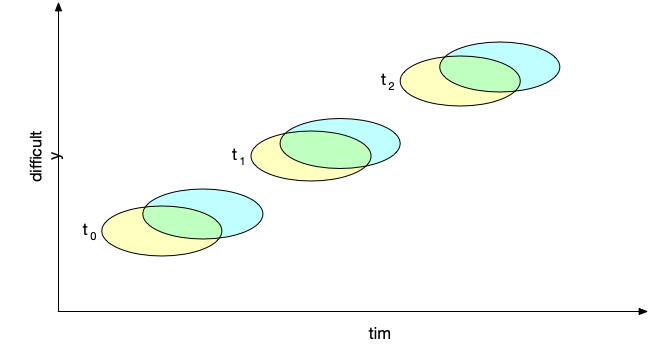 In an ideal career, you find yourself progressing up the difficultly curve, such that you are always doing some stuff you’re good at, and undertaking some new work. This is the oft-cited stuff of Mihaly Csikszentmihalyi’s Flow, and correlates with a rewarding career.

But it’s not just you.

There is also the organization around you, and that organization is composed of many other folks who are all learning as well.

Sometimes, especially early in your career, your learning is entirely within areas the broader organization already knows well. Whenever you have a problem, there are many other folks you can turn to for answers and advice. This is a great place to start out and learn very rapidly. (Depending a bit on your learning style.)

In small companies, or as you get deep into your carer, you often find yourself experienced at tasks that the broader organization is unfamiliar with. This is a tricky time, because the organization depends on you to deliver the work that only you’re experienced with, while simultaneously depending on you to rapidly learn new skills that no one in the organization can teach you.

This is when folks start falling behind in their role’s growth.

The consequences here are significant. The person in that role will often become a bottleneck on the company’s execution, and their rate of learning will decrease even more as they refocus on work they’ve already mastered. Burning the midnight oil, their excitement for the job will decrease. That frustration will often be compounded by new tasks that still need to get done, but they can’t get around to.

If this goes on long enough, the company must hire an external candidate who is either already experienced or has the time to learn.

Typically when the leader of an organization fails to scale with it, they are left in place, while some aspects of the role are shifted away. As a result, it’s often the case that any manager’s failure to scale with the company can unintentionally cram down an entire organization’s career growth.

How do we escape this trap?

Working on the system

Your goal as a leader is to offload work that you are experienced at to the wider organization as rapidly as possible, freeing up room for you to continue learning. The E-Myth Revisited calls this “working on the system,” and it’s one of the best ways to ensure you’re continually shedding tasks that you’ve become experienced with.

Some examples of high-leverage work that continues to be highly valuable as your role’s complexity grows:

If you’re spending most of your time on those activities, you’re heading in the right direction. Conversely, some examples of getting caught working in the system are:

There is some nuance here. Often you’ll hear folks say that they want to be more strategic, and then they stop doing a bunch of critical work. That’s not the solution here. The goal is to solve for the work you’re experience with, not to abandon it.

Sometimes folks start hiring too early and end up bloating their organization with too much management. That’s a well-known story and it ends in tears. However, it’s life changing to hire a couple of folks who are more experienced than you are, particularly those who are skilled in areas where you’re weaker.

Many leaders in fast growing organization are concerned that more experienced folks won’t want to report to them, or that they’ll get displaced by their more experienced reports. This can happen, but it’s almost certainly the case that if you don’t hire them, you’ll fail to scale with your organization and get layered over anyway.

Now that you have some strategies to free up your time from existing work, it’s time for you have to figure out how to optimize for learning.

Your learning style is very personal, and figuring out how you learn quickly is something that you’ll have to spend time figuring out, but I can share what has worked for me:

That said, the majority of my learning occurs while working through the challenges of my daily work, and I think that’s an important goal to optimize for when trying to learn quickly enough to remain in-role at a growing company.

If you’re someone in a role that keeps getting more complex, it’s normal for it to be difficult. It’s normal to make more mistakes than you’re comfortable with. It’s normal to feel frustrated when thrust towards another new and difficult task.

Certainly some folks have been outgrown by their company, and it’ll happen to more folks in the future, but I believe it’s far from inevitable. If you keep focused on learning and building systems behind you, then it’s possible to scale yourself more and more quickly than I would have ever imagined.