For most meals I eat at home (excluding lunch during the school week when I eat at school... a topic for another time). Although there are pre-made sushi dinners at the grocery (500 yen gets you a slightly small dinner, and 800 gets you a fairly large one), I enjoy the process of cooking (preferably with company!), so I end up buying a lot of groceries. Fortunately, most of the food I ate back in America is equally available in Japan. (For a basis of comparison, the exchange rate between the yen and the American dollar is about 115 yen to the dollar, the lazy man's exchange is to just drop two digits off any yen value and pretend its in dollars.)

I have to admit that I have a weakness for peanut butter. Its a great food. High in poly-unsaturated and mono-unsaturated fat, and is also a good source of protein. Unfortunately it isn't really a staple food over here in Japan. None the less, once I stopped looking for it, I was able to find it at my local grocery store. However, many of the varieties of peanut butter here are heavily sugared and quite sweet. Although the sweetness is strangely alluring spread across a slice of toast, it wasn't really what I wanted from my nominally healthy food staple. 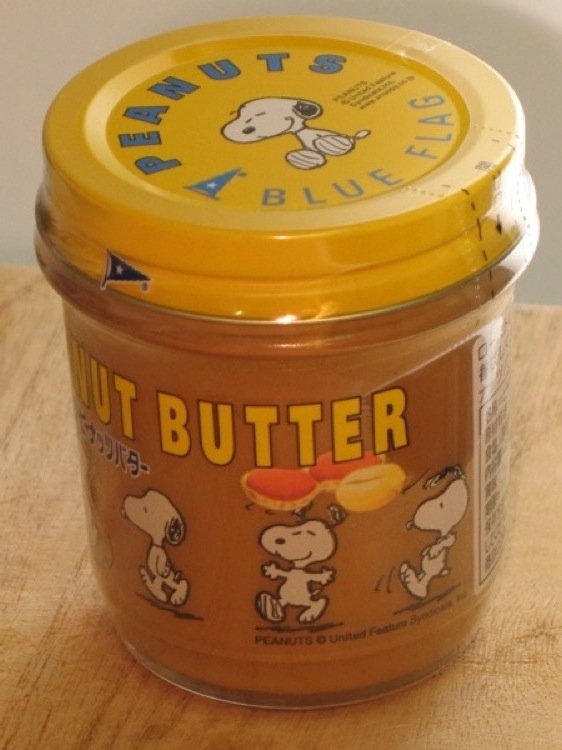 Instead of have settled on the Peanut's brand of peanut butter. The fact that the brand name is a pun somewhat offends my sensibilities, but my pride surrendered to the combination of availability and taste. One jar of the stuff runs 298 yen.

By the way, when I said that I like peanut butter... 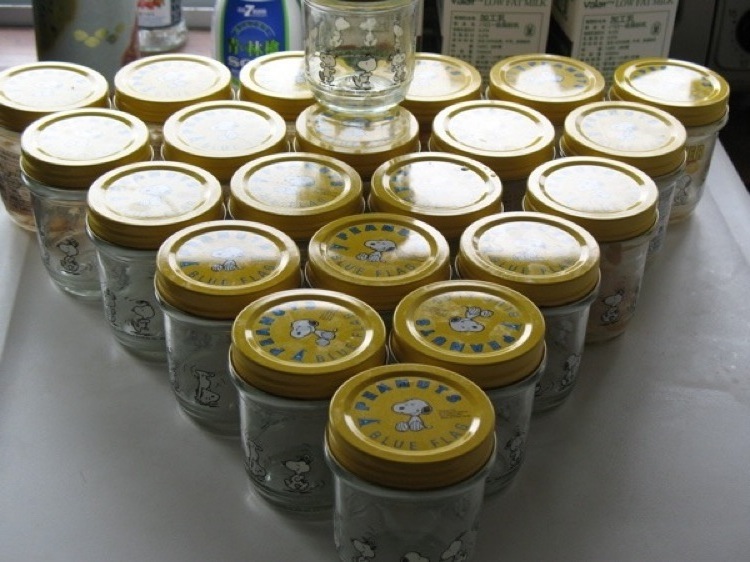 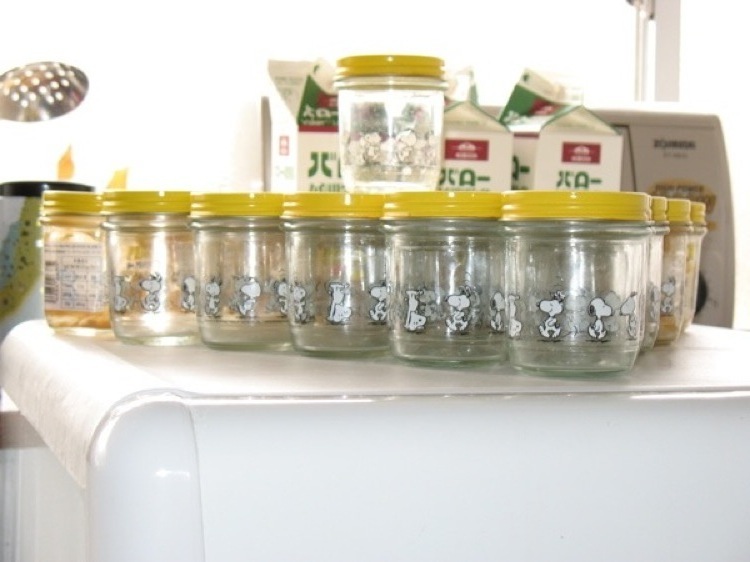 Another of my lifelines is soba. They are buckwheat noodles, and the only source of carbohydrates you will readily find in Japan that is not made from refined white flour (the other day I saw one of the teachers at my school when she was eating dinner and she mentioned to me that she was eating brown rice, I got excited and asked her where she found it, and she said that she has to mail order it from a special company, I felt somewhat thwarted at that point). Soba has a fairly low glycemic index, so makes for a good addition to any meal (I use it as the base of my stirfries). This packet of soba is 198 yen, and makes about eight servings. 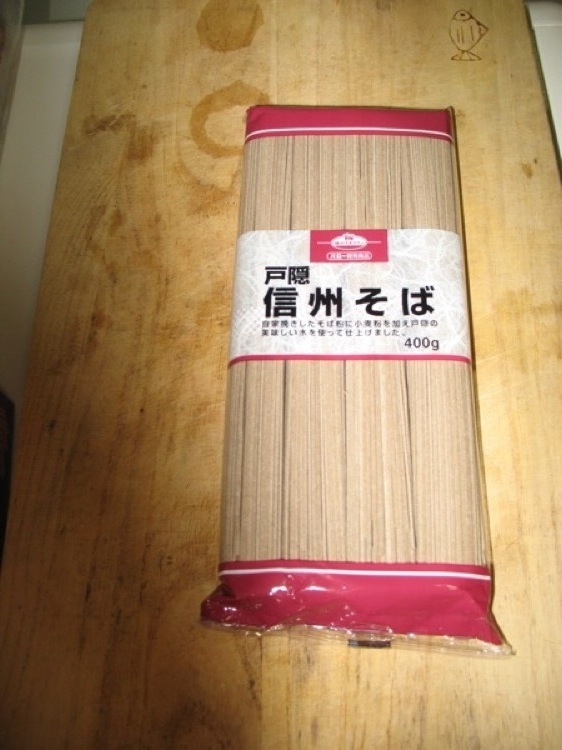 Preparing the soba involves putting the noodles in a pot, breaking them in half (because they are too long for all my pots...), filling the pot until the noodles are covered with water, and waiting for four or five minutes.

I am a man who likes tea. Coffee is dandy, but you won't find me sipping a cup of joe and ruminating on the approaching day. A hot cup of green tea befits a few moments of quiet contemplation like few other beverages can. Seeing as I am living in the country the world associates with green tea, it seemed appropriate to take my green tea habit to an entirely unseemly new height. This is a list of beverages I have drank more than ten times since coming to Japan: water, milk, beer, and green tea. I drink about two to four pots of green tea on weekdays, and have the tendency to drink a whole lot more on a quiet weekend day at home. 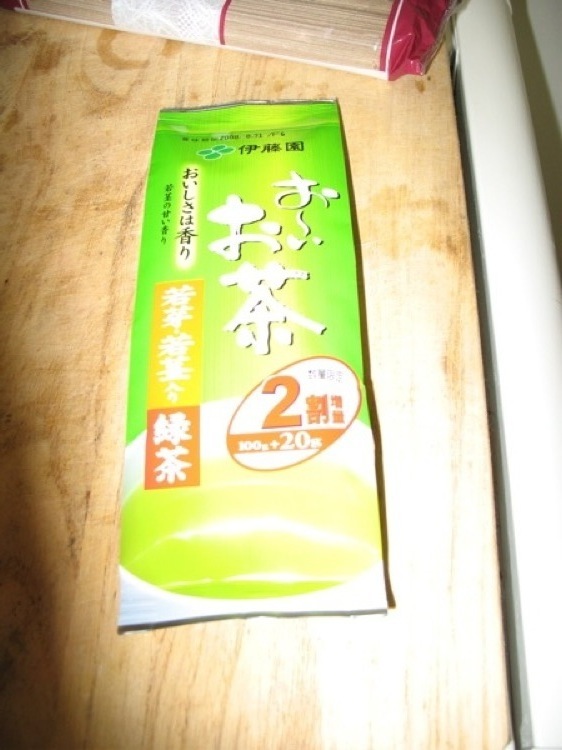 A packet of green tea at the supermarket costs me 598 yen, and lasts for around a week depending on the absurdity of my tea consumption. I use about a tablespoon of the leaves for a pot, and refill the pot once it is nearly empty to get a little more mileage from the leaves.

I began my Japan culinary adventures eating cornflakes, because they were a lot cheaper than the other varieties of cereal, but there was a growing anger at the unapologetic whiteness of the cornflakes. There is a food that screams "I am raw sugar in disguise". Soon enough the grocery store started a sale on its bran flakes, and I immediately jumped ship. 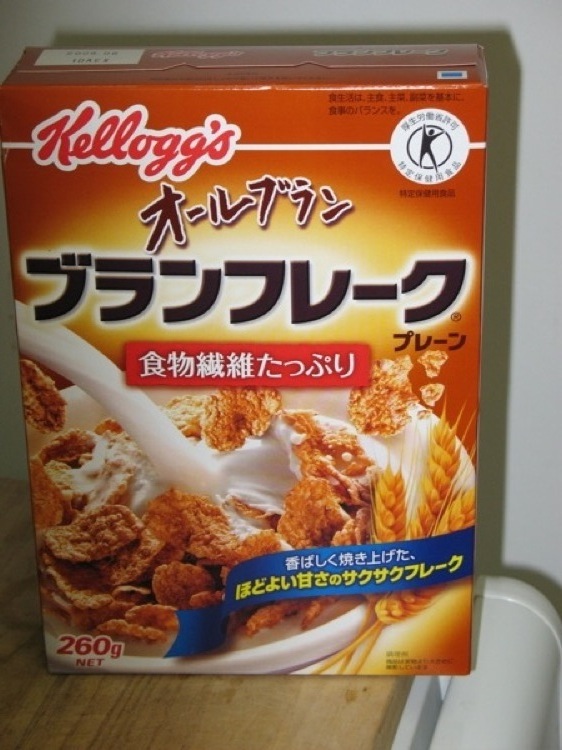 I have some harsh childhood memories of a vendetta against bran in its many incarnations, but fortunately that intense hatred has been replaced by a warm friendship. This box of bran flakes is on sale for 298 yen these days, but I think its non-sale price is around 398 yen. Hopefully the sale will continue on for another couple of months.

Before the noble bran flakes entered into my shopping hall of fame, I had already stumbled onto the delights of store-brand granola. Although its hard to defend granola as a particularly nutritional food (its essentially sugar mixed with things that look healthy), its still a valuable component of my breakfast meal (I wake up excited about eating breakfast, for what its worth). 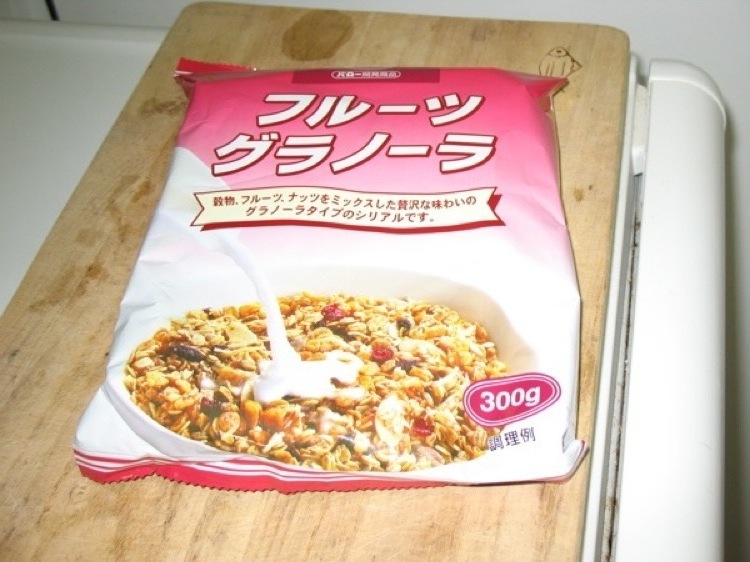 A bag of this granola (labeled fruit granola, which means there are occasionally epicly small pieces of unidentifiable dried fruit mixed in) costs 298 yen, and is a worthy addition to your breakfast feast.

Japan, the presumed home of all that is wholesome and healthy, does love its milk wholesome. As in... whole milk. So much whole milk. Every school lunch includes a carton of whole milk. Lucky me. Fortunately, they do have some not-whole milk too. 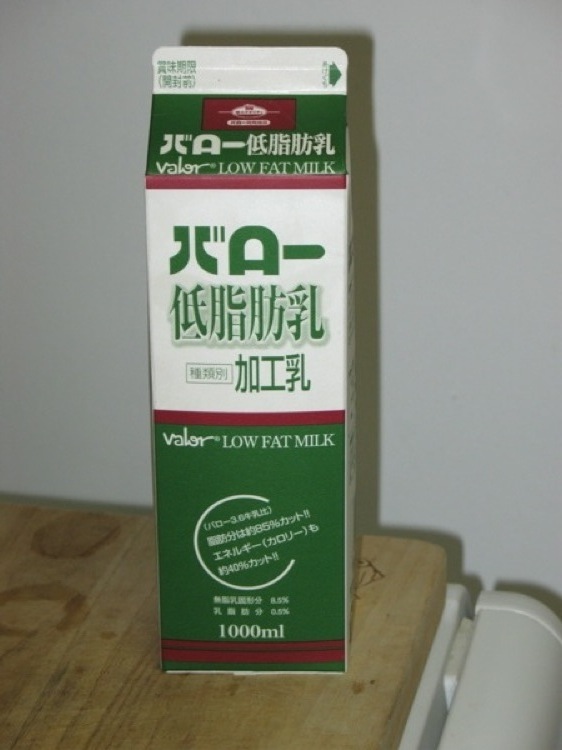 The green cartons of reduced fat milk are approximately 4%, so twice the good old American standard of 2%. I haven't had any success in finding any skim milk, but there is a lot of soy milk. I'm not sure if the soy milk here uses whey or not.

In general Japanese have very strong opinions about Japanese beer, this is to be expected I suppose. Non-Japanese have one very strong opinion about Japanese beer: why the hell does it all taste the same? Indeed, pretty much all Japanese beer tastes the same (they have a very bizarre taxation system that seemingly forces the brewers to create the same product of get taxed at an absurdly higher bracket, microbrews cost about three or four times what a non-microbrew costs). There is no such thing as an inexpensive dark beer here. 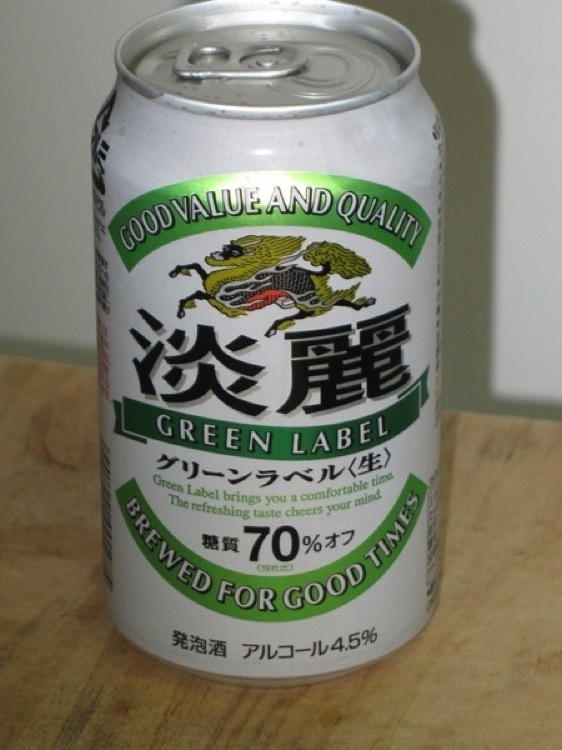 In walks the green label of Kirin beer. It is by favorite of the standardized Japanese beers. The green label actually means that it is a light beer, but I happen to think it tastes better anyway. Maybe its just my guilty conscience. A six pack of Kirin costs between 700 and 800 yen. That feels a bit expensive, but considering a beer on tap here costs 600 yen (in the rural countryside, in the cities, its the price for a beer on tap), it seems more reasonable. Combined with the fact that I usually just have one beer with my dinner, and its not a big expense.

I end up making a lot of stirfries. Various and sundry stirfries probably serve as my dinner about five times a week. I use the aforementioned soba as a base, and end up purchasing a wide variety of vegetables and either chicken or beef. 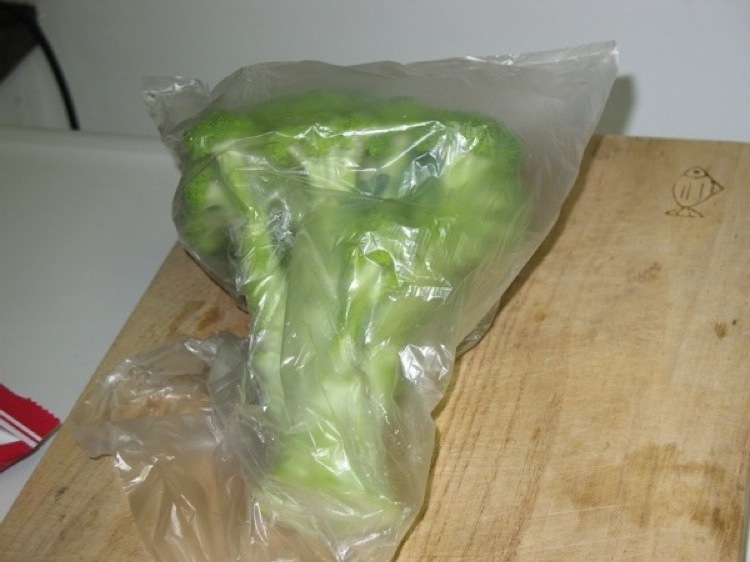 For vegetables I end up using a lot of broccoli, onions, mushrooms, bean sprouts, and celery. Vegetables here are not too expensive, but aren't overly cheap either (excluding bean sprouts, which are usually 28 yen for a fairly sizable bag). The head of broccoli in the picture ran 198 yen. I guess thats a bit expensive considering it wasn't particularly big, but my attitude is usually that good nutrition is worth paying for. 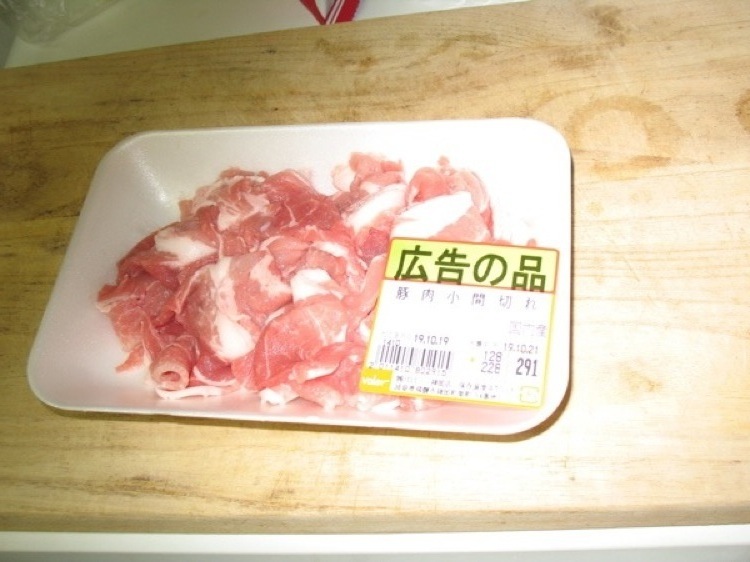 Chicken and beef as both available in the grocery store, and the beef is precut into little strips that are perfect stirfry candidates. The chicken has to be cut up, but that isn't really particularly inconvenient. The beef in the picture cost 291 yen. Its enough to contribute to two large servings of stirfry. The same amount of chicken would cost between 200 and 300 yen. By the way, the Hida region is famous for its beef (Does anyone outside of the region know that? Unsure.), so it can be particularly tasty.

This isn't an exhaustive list of groceries I buy, but it does include most of the foods I consistently buy (I forgot to include eggs! The secret about finding eggs in Japan is that they are not refrigerated in the grocery stores, although you do need to refrigerate them once you buy them). I also buy a good amount of fruit, but it varies a bit depending on what is available at the store. I started out buying grapefruit, then switched to ruby grapefruit, and am currently buying mostly apples.

All in all I spend a good bit of money on groceries each week. I wouldn't be surprised if I spent around 10,000 yen each week (around ninety dollars), maybe even a little bit more. For me having good and healthy food is a quality of life issue though, so it isn't something that I want to cut corners on: the JET salary is more than enough to cover healthy and tasty food, especially if you are preparing it yourself.