Yesterday I went to the Freebase Hackday 09, and it was a great opportunity to get to learn more about Freebase by talking with the engineers who have actually built it. In addition, it was my first introduction to Freebase Apps, the cornerstone of which is Acre: a server and client side JavaScript platform for creating webapps.

I find it mildly terrifying, to hear of yet-another-web-server (no disrespect to YAWS) which comes with its own development environment, its own templating language, and its own supporting libraries. It takes a lot of time for the server/environment/ide/library team, and also imposes a burden on each developer who attempts to work within the environment. What makes me most wary is that it is a really fun problem to work on, which are the most dangerous kind.

In this case, though, I think the final product of Acre is fairly sound. I could nitpick about a few minor things, but within an hour or two of hacking around, Acre is pretty intuitive to get used to, and the Acre documentation is more than adequate. Overall, the environment is a bit young, but seems like it may polish into something quite pleasant. (It reminds me a lot of Bespin.)

At the Hackday, one of the suggested projects was working on was along the lines of Games With a Purpose, which is what I worked on. Working with Peter Burns and a couple of other extremely helpful Metawebbers we were able to put together a very rough concept which is operating under the deceptive codename of... Image Game. 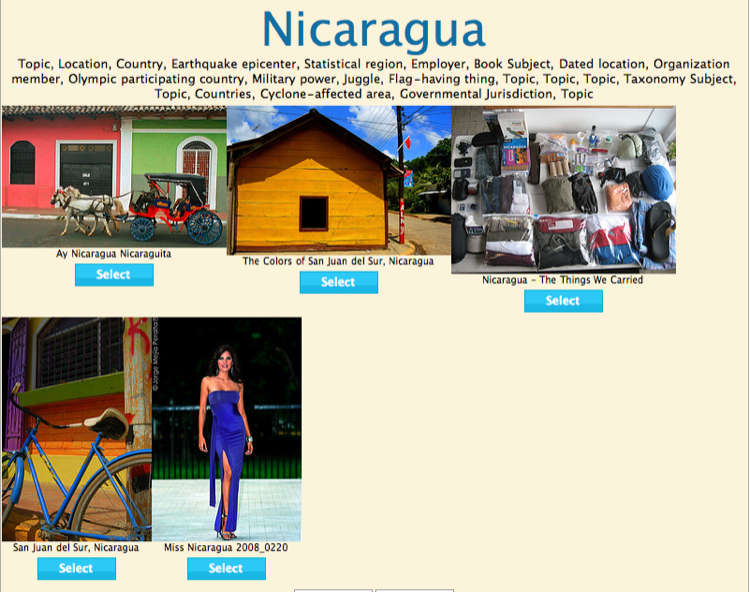 (Sorry that the attributions aren't shown in this prototype. We ran out of time before demoing for the lightning talks at the end of the day, but without a doubt the attributions will be corrected and included in the locations data before the pictures would be added to the public Freebase data.)

The concept of this genre of games is to use idle cycles of users to solve hard (in the sense that computers have a hard time solving them) problems. The concept of Image Game in particular is to find locations in Freebase which haven't yet had an image associated with them, query against the Flickr api for likely matches (initially the matching is simply done on tags, but ideally it will be done using a combination of tags and geo-tagging later on), and then have users decide which of the images are the best match for a given location.

Those votes are then used by Metaweb for reasoning on selecting appropriate images (requiring some number of disparate users who agree on a given image for a given place, etc), and eventually the user supplied data can make its way into the public Freebase data as well.

Was a fun event, and a fairly fun little app to work on. Hopefully it will get polished up a bit over the coming weeks, but either way I'd definitely recommend attending the next Freebase Hackday.