tl;dr - it’s valuable to update your LinkedIn profile to be a concise, accurate, and current summary of your accomplishment. Spend at most two hours updating it, then ask a friend (ideally a recruiter) for feedback. Incorporate that feedback and don’t think about your profile again for at least a year.

While writing my notes on landing an engineering executive role, a topic that came up in feedback a number of times was how valuable it is to have a reasonably good LinkedIn profile. There’s absolutely diminishing returns in going from decent to fantastic, but it’s well worth investing several hours into your profile unless you’re confident you can find the roles you’re interested in from investors, CEOs, or recruiters who you already have a working relationship with.

When does your LinkedIn profile matter?

Why reasonably good is your goal

Because few folks spend much time on it, formatting only matters so much, and too much content can easily work against you by crowding out the most valuable pieces. Your accomplishments matter significantly more than your formatting. Spend at most two hours improving your LinkedIn profile, then return your focus to doing things valuable enough to one day add to that profile.

Your goals for your LinkedIn profile are:

That’s it! If you try to do more than that, you will crowd out more valuable pieces with something less valuable. Adding a few pieces of more concrete advice here:

There are certainly more things you could do, but that should take you well through your two hours of budgeted time.

Breaking down my LinkedIn profile

So I’ve written down some abstract rules above, but I thought it might be useful to concretely walk through my LinkedIn profile and explain the various choices I’ve made. This is just my profile, there are certainly much better ones out there, but it’s the easiest one for me to specifically discuss.

I’ll walk through the contents of the public profile first, then discuss a few other aspects that are not shown in the public profile, but are visible for any logged-in LinkedIn member. The first thing to discuss briefly is my profile’s URL: https://www.linkedin.com/in/will-larson-a44b543/

It’s not a particularly clean URL, I’d certainly recommend starting with a more concise one. That said, I haven’t seen any evidence that having a shorter profile URL really matters. These links are being copy-pasted around after being discovered through LinkedIn search, no one is typing your LinkedIn URL from memory. Instead, I’ve optimized for a durable URL that has remained the same rather than tweaking it to be shorter. 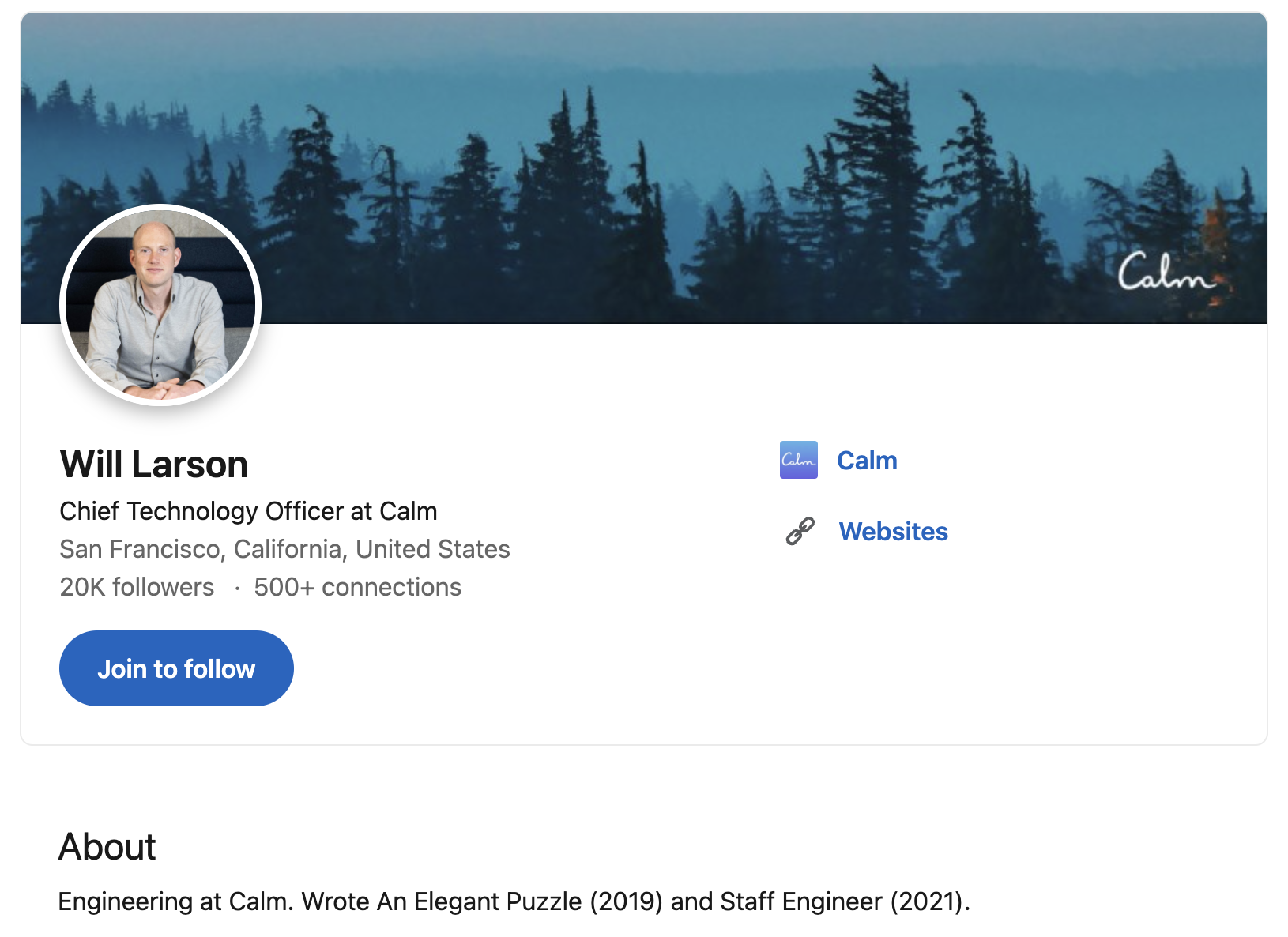 The top section of the profile has four important pieces: headline, profile image, background image, and the about section. My general philosophy for these sections is to be very concise and eliminate any extraneous information.

My headline is my current title at my current role: Chief Technology Officer at Calm. My informal research is that the more senior the individual, the less likely they are to include additional information in their headline (angel investor, coach, mentor, etc) or refer to their previous employers (ex-Stripe, ex-Google, etc). That said, as best I can tell, it really doesn’t matter much either way.

Finally, there is also the “websites” link which pops up links to your websites.

I personally think it’s worthwhile for every executive to maintain a website of some sort, even if it’s just a collection of profile links and an email address to reach you. For a long time, the only link I included here was to lethain.com, but over time I’ve added two other writing projects as well. 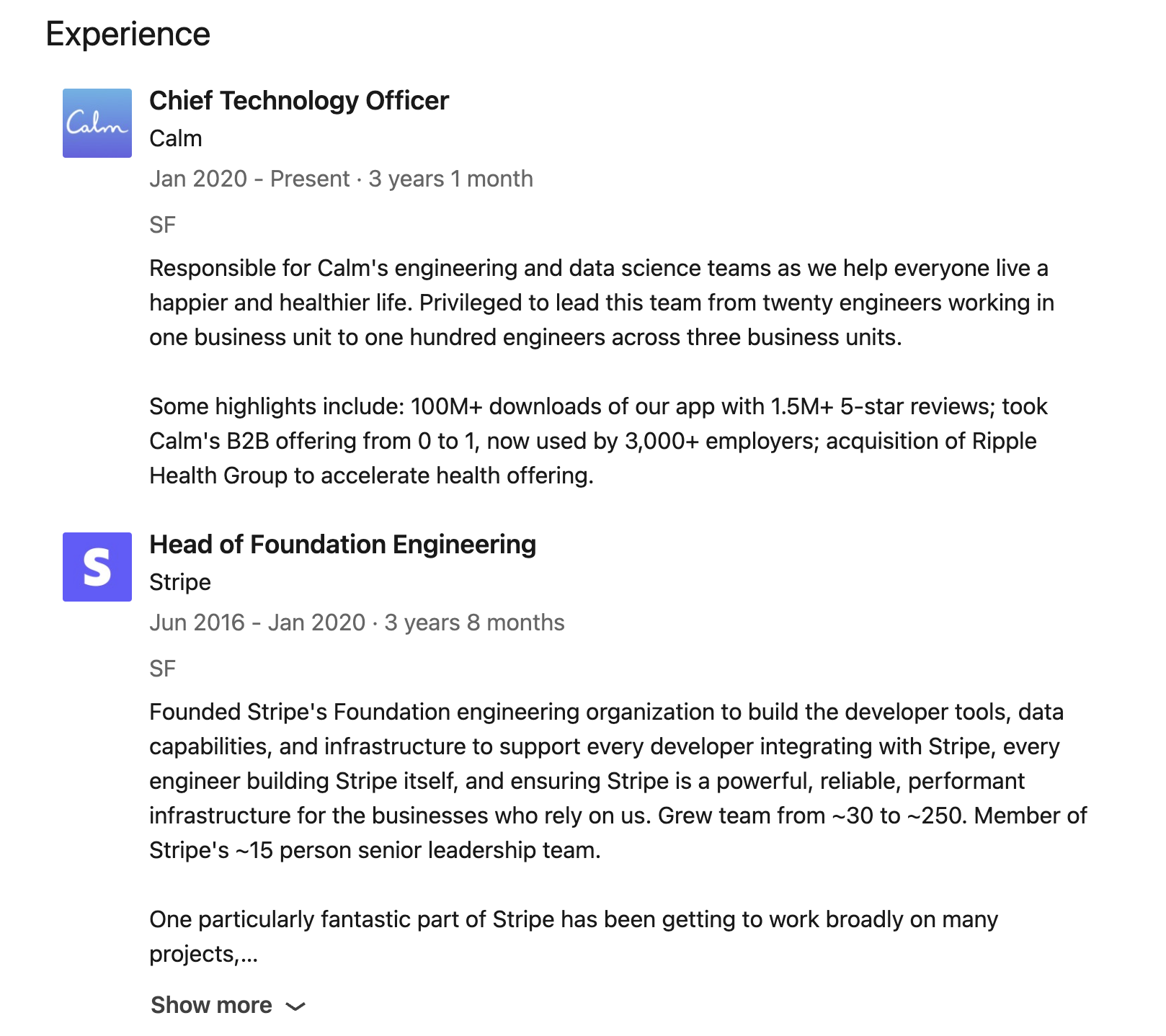 Next, you can see the descriptions of my work at Calm and Stripe. These are my two most recent roles, so I’ve dedicated a bit more space to describing my work, although in both cases I only use two paragraphs. (I’ll note that the more senior the individual, usually the less they write about their work, unless someone else has written their LinkedIn profile for them. Part of the unstated dynamic here is figuring out “how senior” you want to be percieved, and editing down to that threshold, without omitting context necessary to justify your seniority.)

For every role, I tried to do two things: explain what the role actually was to avoid confusion (especially for ambiguous roles like “Head of Foundation Engineering” at Stripe, which is a bit open ended), and include numerical accomplishments describing the role. Finally, it’s somewhat declasse to anchor on headcount as an accomplishment, but I find that most executive recruiters filter candidates based on previously managed headcount, so I consider it valuable to include. 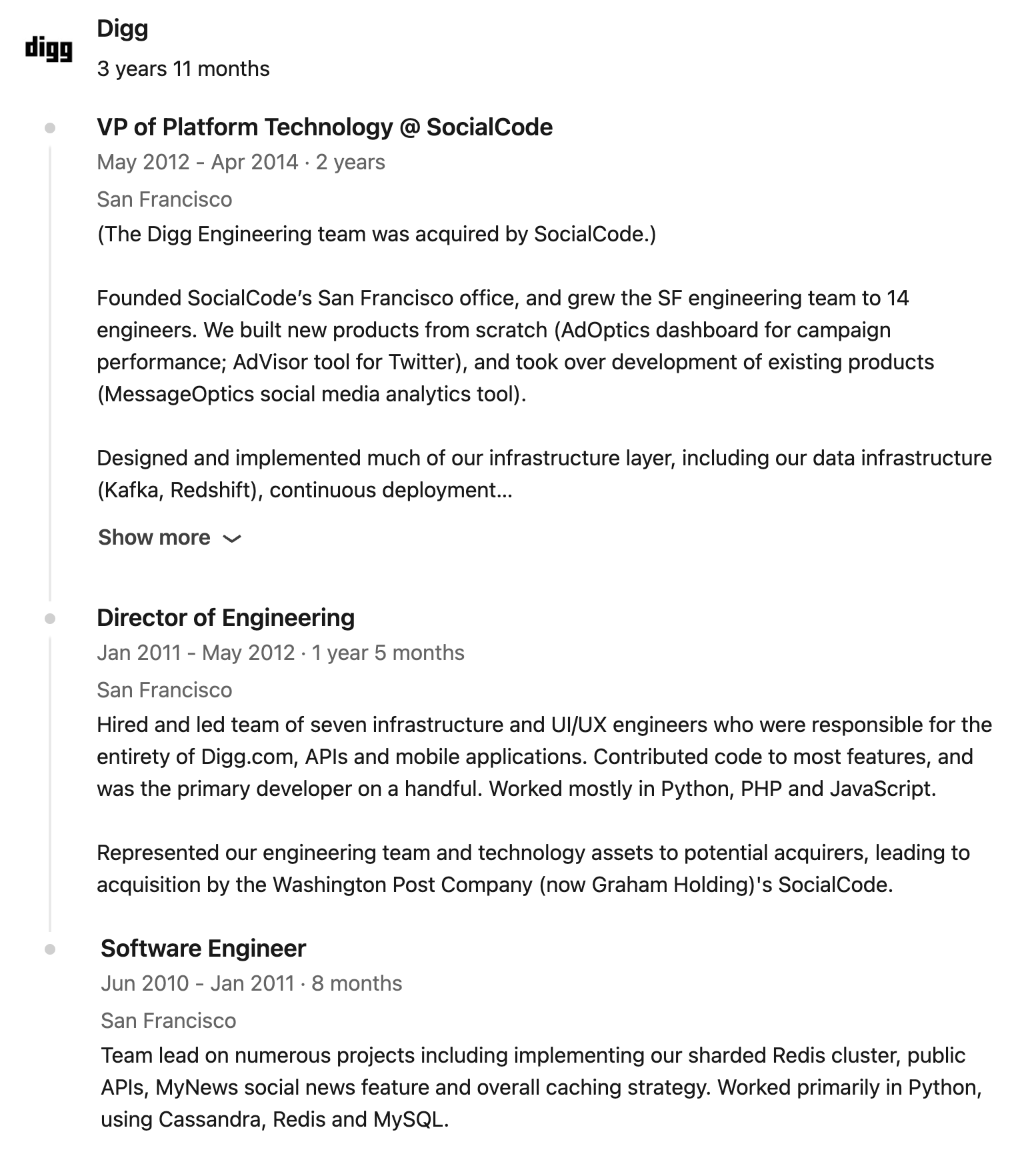 Historically, I was anxious about my resume showing a series of two-year stints, and wanted to emphasize that my time at Digg was really a four-year stint, split by being acquired. To message that more directly, I decided to combine my time at Digg and SocialCode into a single segment. To avoid confusion, I was very deliberate about the acquisition in both the post-acquisition role’s title and description. 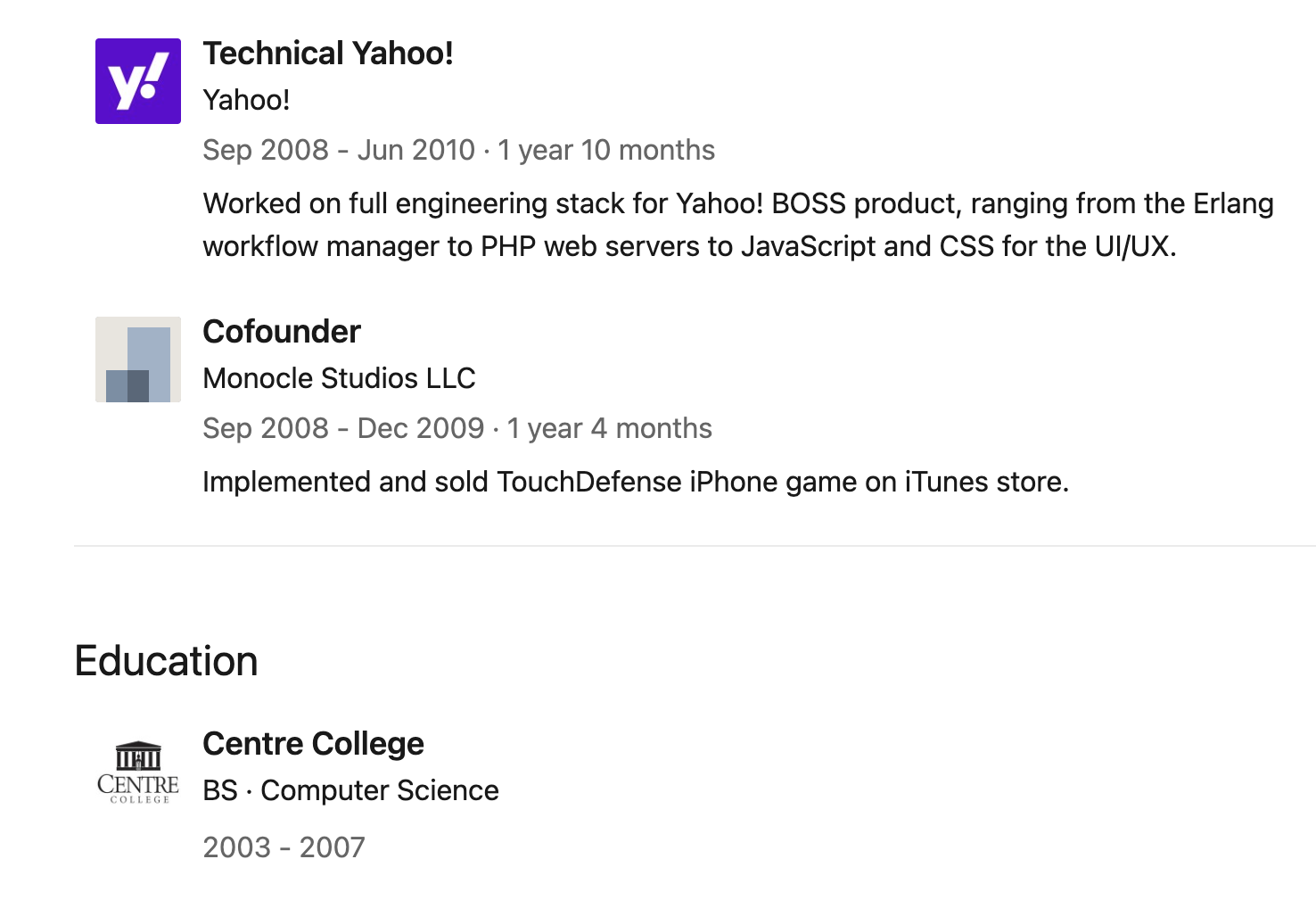 For my oldest roles, I’ve compacted their description down to a sentence. If there is something particularly unique in your previous experience, absolutely mention it, but otherwise folks are generally not that concerned with the details of work you did eight-plus years ago. (I actually forgot this, but I also removed my older, non-engineering roles entirely. They’re just not relevant to my current professional goals.) 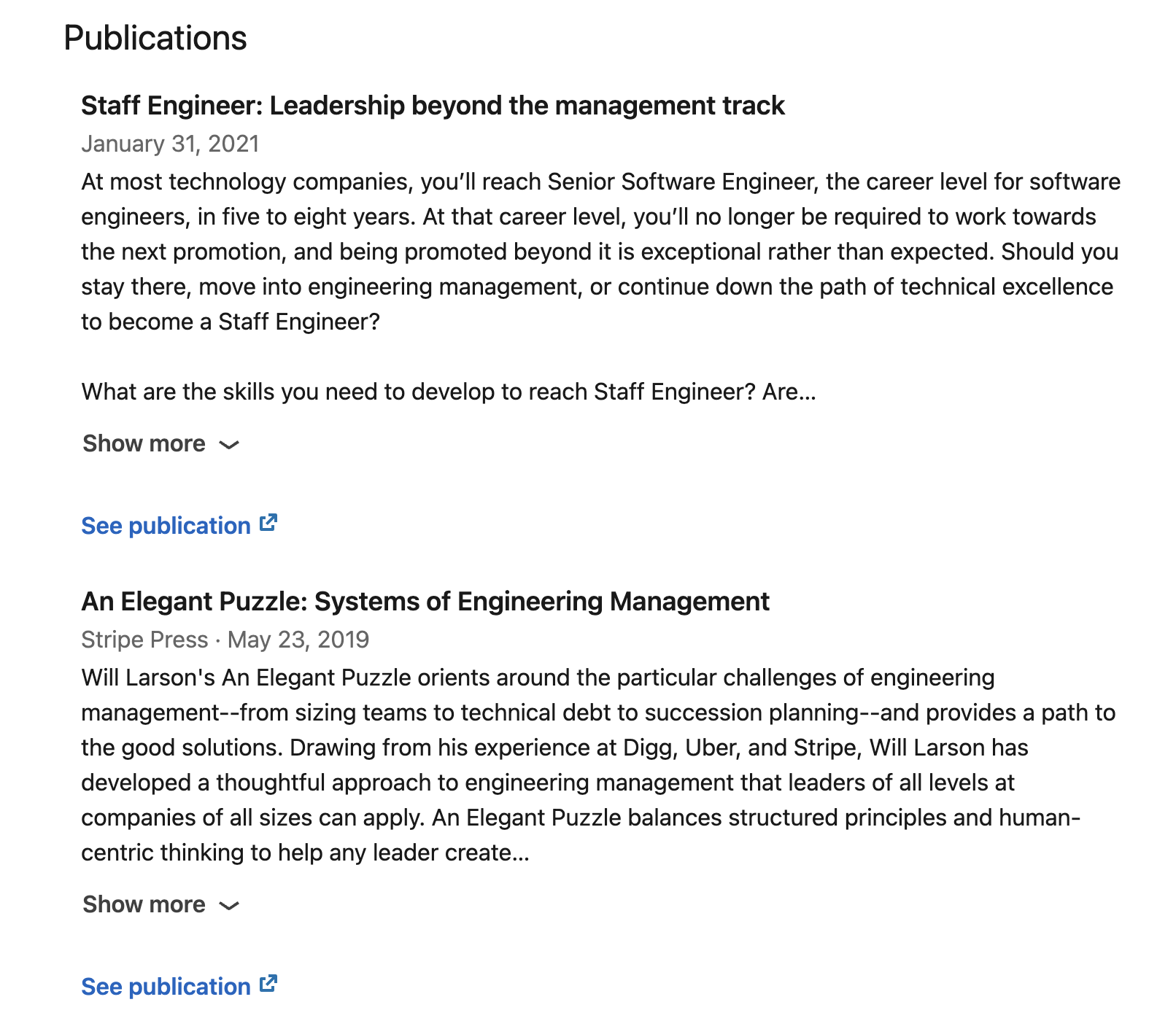 The last section of the public profile is the list of publications. I’ve used this to highlight my two books. At one point, I also included individual pieces I’d published, like this one in Increment, but I pruned down over time. Generally speaking, the publications section is not important for most executive jobs (as opposed to e.g. a research role), and don’t feel nervous about leaving it blank. 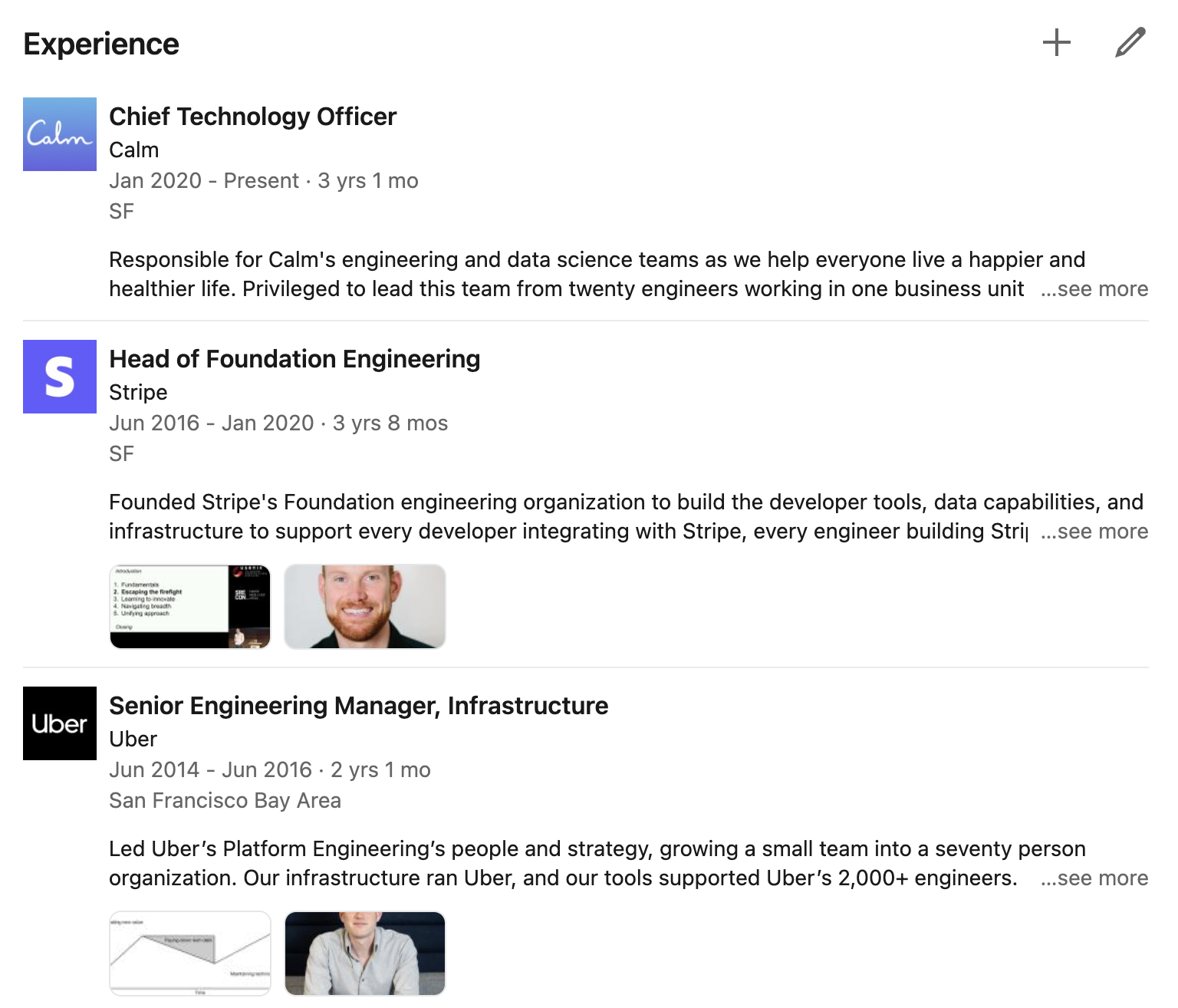 When someone reads your resume, you want them to get excited about the idea of working with you, and watching a video of you speaking about a relevant topic is very likely to get them excited. Wherever possible, I include relevant video of me speaking about work done at a given company.

While I believe videos build the most visceral connection, other mediums of content (e.g. blog posts) can also be effective. LinkedIn does a good job of packing the media into a small amount of space, so it’s an easy opportunity to allow folks to learn more about your work without overwhelming the page. Remember, of course, that most folks won’t watch or read what you’ve linked, but it’s there for those who are most interested.

Finally, two ending thoughts. First, there’s obviously no “right” way to make a LinkedIn profile, particularly not for executives. Do what makes sense to you, get feedback from experienced recruiters, and cap your time investment at a few hours. Second, a good profile will never drive people to read it; instead you need to do something notable or write something interesting.