A friend is six months into supporting a sixty person engineering group. Perhaps unsurprisingly, most of their teams believe they have urgent hiring needs. To spread hiring equally across the teams in need, or to focus hiring on just one or two teams until their needs were fully staffed? That was the question.

It’s a great question, and captures a deeply challenging aspect of leading an organization. It’s fun to do initial discovery, learning from and about everyone. The rare moment when you choose to reorganize the team is painful but concludes quickly. What’s much harder is keeping the faith when you’ve played your cards and need to find space for your plans to come into fruition. Staying the course is particularly fraught when it comes to growing an organization, because some teams always need more than you choose to provide.

When you talk about growing an organization, the conversation usually leads to hiring. While I believe hiring is a very important approach to growing organizations, I believe we reach for it too often. In order to prioritize hiring for scenarios where it’ll do the most good, over the past year I’ve developed a loose framework for reasoning about what a given team needs to increase performance.

Four states of a team 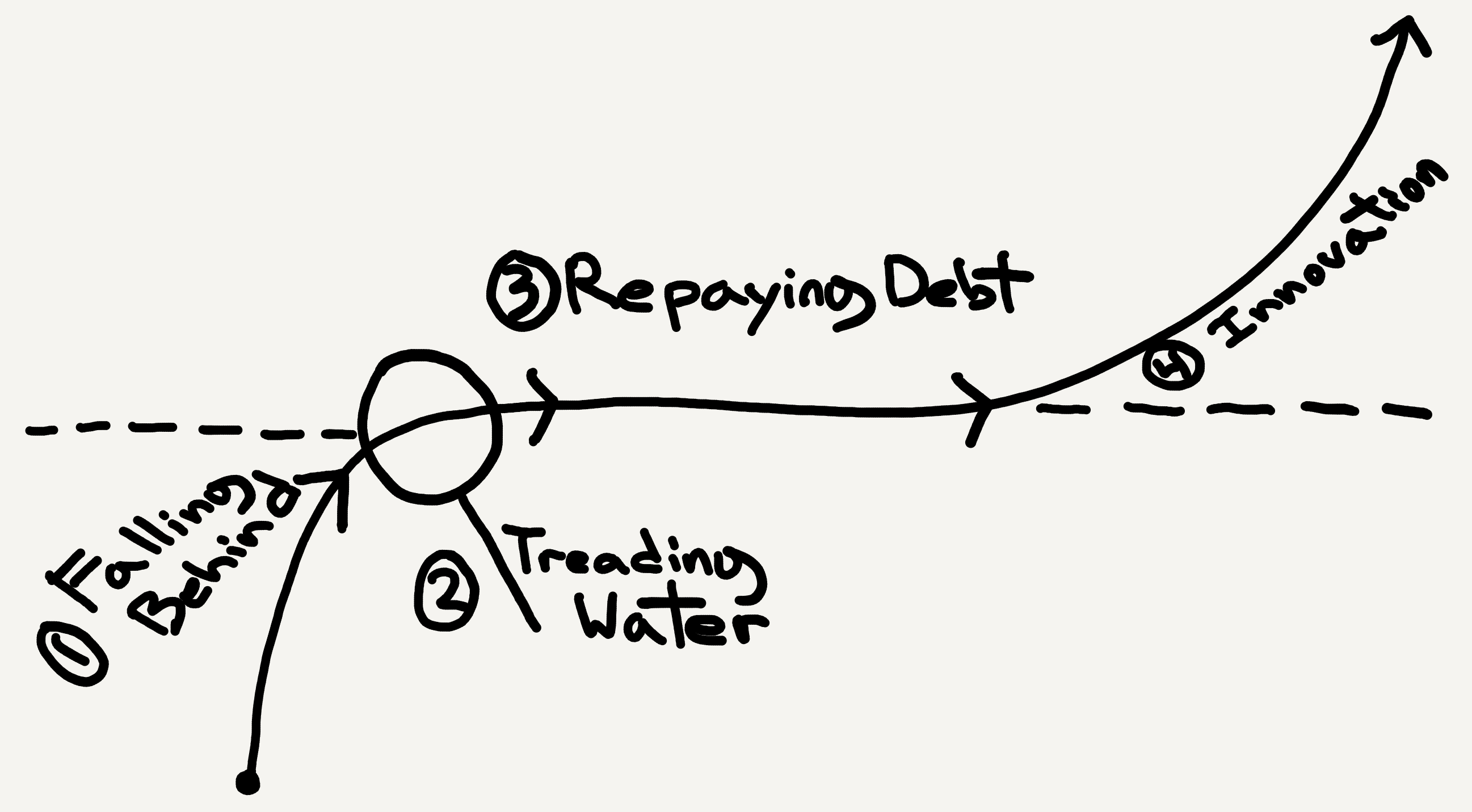 The framework starts with vocabulary for describing teams, their performance within their surrounding context. Teams are slotted into a continuum of four states:

Teams want to climb from falling behind to innovation, while entropy drags you backwards. Each state transition requires a different tact.

For each state, here is the strategic solution that I’ve found most effective, along with some ideas around how to support the team while they come to fruition:

I can’t stress enough that these fixes are slow. This is because systems accumulate months or years of state, and you have to drain that all away. Conversely, the same properties that make them slow to fix make them extremely durable once in effect!

The hard part is maintaining faith in your plan. Both your faith, and the broader organization’s faith as well. At some point you may want to launder accountability through a reorg, or maybe skip out to a new job, but if you do that, you’re also skipping the part where you get to learn. Stay the path.

As an organizational leader, you’ll be dealing with a number of teams, each of which is in a different place on this continuum. You’ll also have limited resources to apply, and they’ll usually be insufficient to simultaneously move every team down the continuum. Many folks try to move all teams at the same time, peanut buttering their limited resources, but resist that indecision-framed-as-fairness: no one getting anything is not a fair outcome.

For each constraint, prioritize one team at a time. If most teams are falling behind, then hire onto one team until it’s staffed enough to tread water, and only then move to the next. While this is true for all constraints, it’s particularly important for hiring.

Adding new folks to a team disrupts that team’s gelling process, so I’ve found it much easier to have rapid growth periods for any given team followed by consolidation/gelling periods where the team gels. The organization will never stop growing, but each team will.

This approach to nurturing great organizations is the opposite of a quick fix. While slow, I’ve found it consistently leads to enduring, real improvement in the happiness and throughput of an organization. Most importantly, these improvements stick around long enough to compound, creating a durable excellence.