A few weekends ago I spent the day locked in furious battle with friend and Monocle Studios co-founder Luke Hatcher. The event was DjangoDash, an event where teams of 1-3 spend a weekend trying to create a site from scratch. We went into the weekend with very little preparation. Luke went into the weekend with a partner who once fancied himself a Django blogger but had subsequently forgotten everything about Django (that would be me).

Lop-sided competence and initial disorganization proved surmountable as cheery camaraderie manifested into our site, DrinkFindr. DrinkFindr is a pretty basic site for creating, rating and discovering mixed drinks based on ingredients and names. It probably won't shake your world, but it can give you a hangover. Most shockingly, the Monocle Studios team pulled through to get 10th place in the DjangoDash rankings. We'll use the staggering rewards of our victory for the benefit of mankind. Well, I'm probably going to Crepes on Cole for breakfast, anyway. That might benefit mankind. 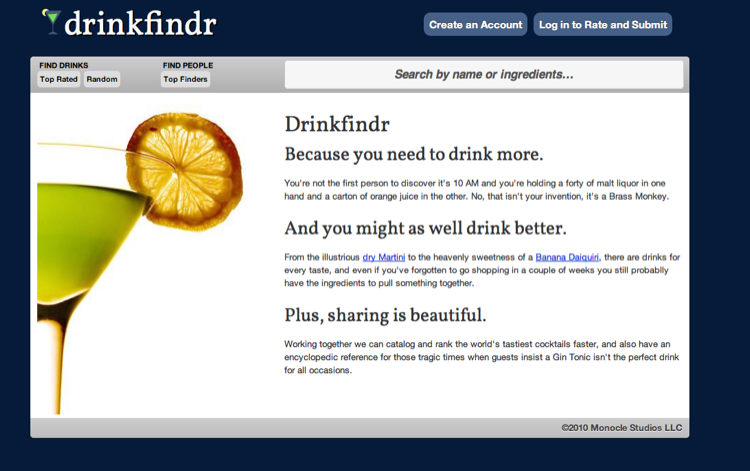