A month ago history reset with the second launch of Digg v1, and memories are starting to fade since much of the Digg team joined SocialCode four months ago, so it seemed like a good time to describe the system and team architecture which ran and developed Digg.com from May 2010 until May 2012.

There won’t be controversy here, not even much of a narrative, just a description of how we were working and the architecture we built out.

We have to start with a bit of context surrounding the company’s size, how the teams were organized, and how the structure was impacted by a series of layoffs and subsequent hiring.

For focus I’m not covering the Sales, Finance, Ad Management, Design, HR, BD teams and such; they were important pieces of the company and how it functioned, just not central to this particular story.

Our story starts with a fairly traditional company layout, with distinct Product, Engineering and Operations leadership. The Product team was rather small with four members, the Operations team was about eight engineers, QA about six engineers, and the Development team was around twenty developers.

The development team itself was structured around four horizontal teams (frontend, API, platform and infrastructure), and two vertical team (ads, analytics). The Product team operated with vertical ownership over pieces of functionality, coordinating between the various horizontal development teams.

Over the course of several layoffs and subsequent departures, the organization structure eventually reflected a return to simpler times.

To expand upon the diagram a bit:

This system for reviewing, testing and deploying code was–to my mind anyway–the most important and successful piece of developing code at Digg. It was structured enough to code standards high and consistent with our forty person team, and later on it was lightweight enough to not bog down the much smaller team.

There were a smattering of other practices which we employed, but most of these evolved from practice rather than being deliberate decisions.

Moving past how we were developing, let’s take a look at the system we developed.

Thus Spoke Conway, or “The Architecture” 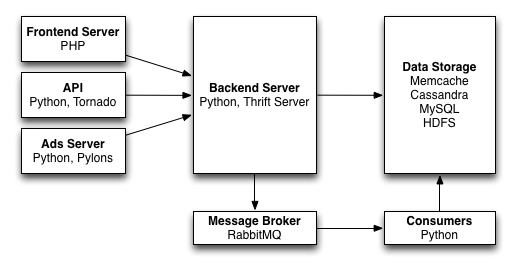 That said, it was a very standard architect for a team of our size, with the frontend team developing in stateless PHP/HTML/JS, with state and storage managed by the backend server, and with a message queue for handling long-running and non-transactional processing.

The most unusual aspect was probably the backend servers which were gevent based Thrift servers. For better or worse–by which I mean entirely for the worse–there isn’t a standard high-performance Python thrift server, so we ended up spending a good amount of time with gevent and making gevent-safe client pools. I’d probably avoid using Thrift for a Python server again, simply to avoid having to maintain a similar server.

Having both PHP and Python servers always bothered me a bit in the “I would never plan it this way” sense, but in practice wasn’t much of an issue: the last year or so, pretty much our entire team was comfortable working in both languages, and didn’t have too many complaints.

In the same vein of the perfectionist system designer, having Tornado, Apache+mod_wsgi+Pylons, and the Python gevent servers bothered me a bit, but in practice wasn’t that much of an issue (if we hadn’t had the Jenkins and Puppet deployment systems, I believe the technology proliferation would have been far more painful).

Altogether, I think that our process and architecture were pretty reasonable, and worked out well for us. If we started over today we would definitely approach thing differently, or if the team hadn’t shrunk so significantly, or if we hadn’t been simultaneously managing the technical debt of legacy systems, APIs and contracts, and so on; those are all interesting topics to broach sometime.

There is also an article worth writing about the database and technology proliferation at Digg (Cassandra, MySQL, Redis, Memcache, HDFS, Hive, Hadoop, Tornado, Thrift servers, PHP, Python, Pylons, Gevent and such), which I’d like to piece together.

Or thinking through how our organization structure impacted how we worked (if this is an interesting topic for you, you must watch Adam Pisoni’s talk about the adaptable organization).

All in good time.