The three biggest sources of candidates are referrals from your existing team, inbound applicants who apply on your jobs page, and sourced candidates that you proactively bring into your funnel.

Small companies tend to rely on referrals, and large companies tend to rely on sourcing candidates, using dedicated recruiting sourcers for whom this is their full time job (often the first rung on a recruiter career ladder), and medium sized companies are somewhere on the continuum between those extremes. (Slack in particular has done some interesting work to encourage inbound applicants, and while they’re now getting to the size where most companies depend more heavily on sourced and direct applicants, I suspect inbound applicants are not their largest source of candidates.) 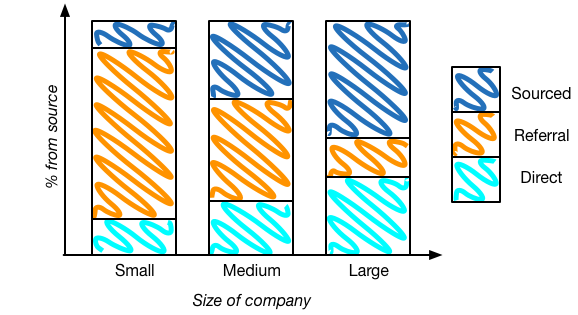 Hiring and recruiting teams tend to prefer referrals because they often have higher pass and accept rates, and most early stage companies, especially those without dedicated recruiting functions end up being primarily composed of referrals. (An interesting caveat: lately I’m seeing more of a second category of referral candidate, who are running their own extremely systematic interviewing process, with the aim of getting offers from three or more companies, and consequently tend to have much lower acceptance rates.)

The other issue is that folks tend to have relatively uniform networks composed of the folks they went to school with or worked with. By hiring within those circles, it’s easy to end up with a company that thinks, believes and sometimes even looks similarly.

Moving beyond your personal networks

Many hiring managers freeze up when their referral network starts to dry up or as they look to bring a wider set of backgrounds onto their teams, but the good news is that there is a simple answer: cold sourcing. Cold sourcing, a technique that’s also common in some kinds of sales, is reaching out directly to folks you don’t know.

If you’re introverted, this will probably be an extremely unsettling experience at first, with questions like “What if they’re annoyed by my email? What if I’m wasting their time?” ringing in your head. These are important questions, and we have an obligation to be thoughtful about how we inject ourselves into others’ lives. I was personally paralyzed by this concern initially, but ultimately I think it was unfounded: a concise, thoughtful invitation to discuss a job opportunity is an opportunity, not an infringement, especially for folks who are on career networking sites like LinkedIn. Most folks will ignore you (which is great), others will politely demur (also great), a few will actually respond (even greater), and a surprisingly amount will ignore you for six months and then pop up mentioning that they’re starting a new job search: I’ve never had someone respond unkindly.

The other great thing about cold sourcing is that it’s pretty straightforward, and I’ll share the approach I’ve used, with the caveat that I believe there are a tremendous number of different approaches that are probably more effective. Take this as a good starting point, track your results, and then experiment!

My standard approach to cold sourcing is:

If you’ve read through this, and are quite confident that this approach won’t work, I’m with you: before I tried it, I was similarly certain it wouldn’t work for me, and that it was just a big waste of time, but I’ve slowly been converted. It’s also important to recognize that very likely this exact approach won’t perform well over time: try something simple, push through your concerns that block you from starting, and then experiment with different approaches.

Is this high-leverage work?

Similarly, a frequent followup question is whether sourcing is a high leverage task for engineering managers. I think it is: folks are more excited to chat with someone who’d be managing them then they are to chat with a recruiter who they’ll mostly work with during the interview process, likewise, I think it’s a valuable signal showing that managers care about hiring enough to invest their personal energy and attention into it.

That said, I would be cautiously concerned if an engineering manager was spending more than an hour a week on sourcing (not including follow up chats, those will take up a bunch more time), there is a lot of important work to be done closing and evaluating candidates as well, in addition to the numerous non-hiring related opportunities to be helpful.

As a closing thought, the single clearest indicator of strong recruiting organizations is a close, respectful partnership between the recruiting and engineering functions. Spending some time cold sourcing is a great way to build empathy for the challenges that face recruiters on a daily basis, and it’s also an awesome opportunity to learn from the recruiters you partner with! We’ve been doing weekly cold sourcing meetings as a partnership between our engineering managers and engineering recruiters, and it’s been a great forum for learning, empathy building and, of course, hiring.

Thanks to Steve, TR and Malthe for reviewing versions of this post.