When the engineering team at Digg was acquired into SocialCode, we had a generous supply of technical and cultural puzzles to think through, but the most immediate challenge was scaling process for an engineering team whose membership doubled overnight.

While I’ve argued that service oriented architectures are for scaling people, they probably aren’t the mechanism of first resort for scaling your team and process. A reproducible deployment pipeline is your first and best tool for scaling an engineering team.

Our approach is going to require a handful of tools:

The combination of tools you choose will have a significant impact, but any selection will be able to support a reasonable deployment pipeline. I’ve had great experience with Git, Github, Jenkins and Chef, and would recommend that as a good starting point.

(Gerrit is likely not a good starting point unless you own yak shears.)

Armed with those tools, let’s put ourselves in the shoes in an engineer looking to deploy their code to production. Their workflow looks like this (assuming for the moment that this particular change is non-controversial, and doesn’t break any tests):

The submitter’s gift of time and attention to this deployment is fairly minimal, and just as importantly they are straightforward actions that require neither exceptional displays of judgement nor feats of memorization. 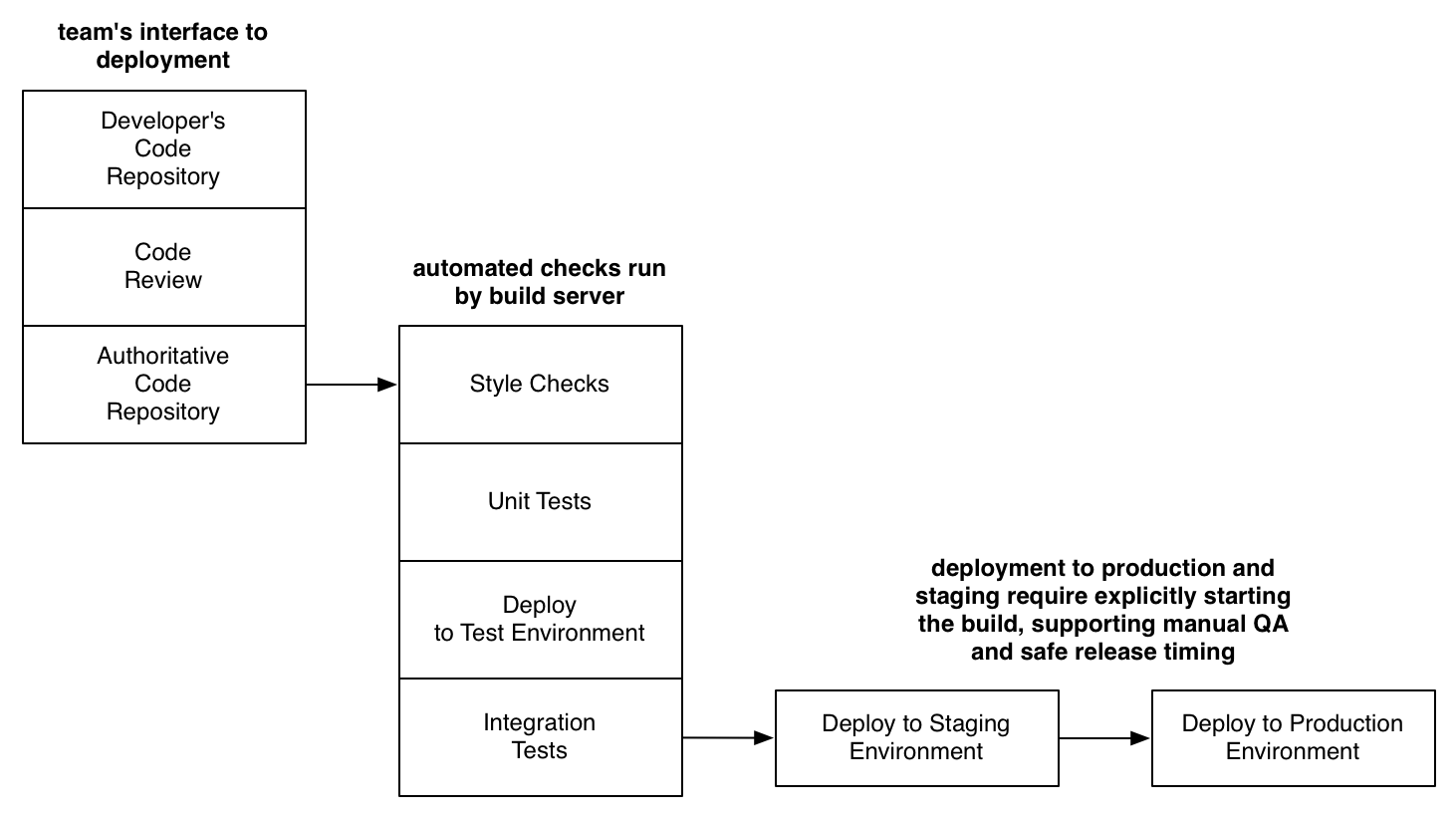 Now, let’s look at the same flow from the tool’s perspective:

Each step taken by the toolchain is a step that an engineer no longer needs to perform, as well as steps they can neither screw up, omit or forget. This is how deployment pipelines improve predictability while also increasing developer throughput.

As your team and organization grows, things will change in ways you can’t productively anticipate: you may decide that you need a manual QA team, you may adoption a different programming language, you may move to static JavaScript frontends which separate codebases, or a dozen other things.

Your deployment pipeline needs to able to that unknowable future.

You can layer in additional tools and manage your speed versus safety tradeoff through these mechanisms:

With a build server like Jenkins, your build is just a script which is executed when certain conditions are met, giving you a great deal of flexibility to optimize for your circumstances. As such, limitations are mostly those of imagination… or because your build server is still running Ubuntu 12.04.

Here are some additional thoughts which don’t merit a full section:

The deployment pipeline I’ve described here is basic, and ripe for improvement, but having witnessed the impact of rolling out a pleasant deployment pipeline, it’s absolutely the first thing on my checklist for scaling out a team and improving engineers' quality of life.

Well, hopefully there are some useful tidbits here, and as always I’m interested to hear suggestions and alternative approaches!