One of my personal goals for the year has been to write more, and this is the sixty-fifth post of the year. At the end of January I wrote up some notes on my blogging, and nine months later I wanted to take a step back to jot down some thoughts on my approach and what I’ve learned along the way.

Since I’ve started writing, traffic has been more-or-less consistently going up each month, which is quite exciting. A year ago, most months generated about ten thousand pageviews, and the last three months average closer to thirty thousand or so.

What those monthly numbers don’t do a great job of showing is just how hits-based things are, with the “good” months being driven by just one or two top articles.

The first spike is the article on Digg V4 and the second is Notes on “The Philosophy of Software Design”, which contributed fourteen and ten thousand pageviews respectively. 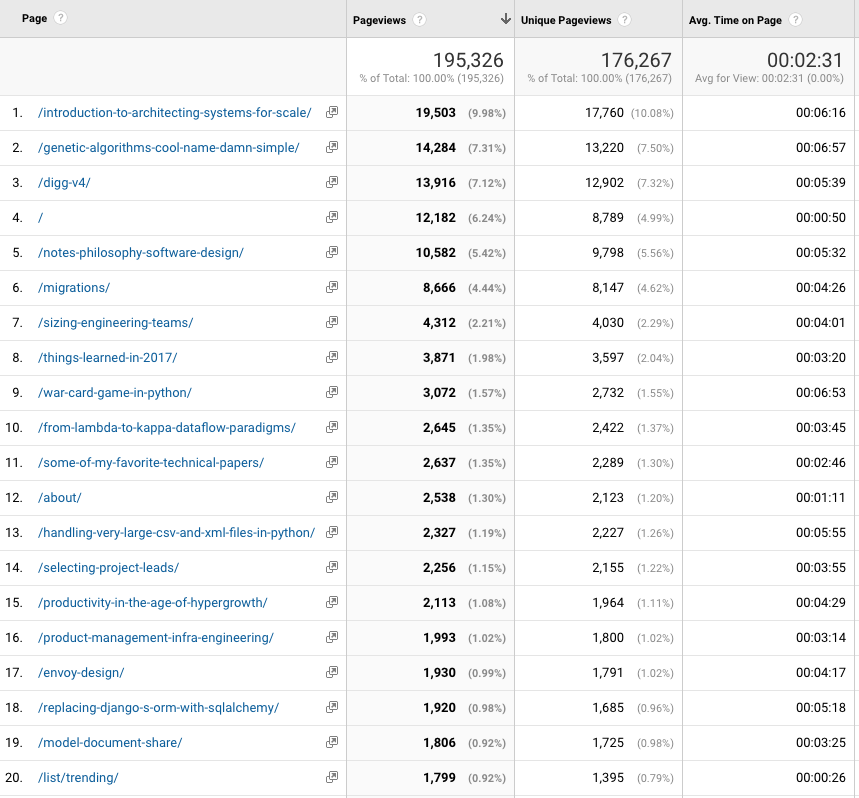 Equally interestingly and less obvious, is that while I experimented frequently with distribution avenues (Twitter tweet storms, LinkedIn posts and articles, Medium, etc), I stopped devoting much energy towards distribution three or four months ago. Instead I’ve focused on writing more, and hopefully better, content, and I find it fascinating that you can’t tell from my traffic graphs when I switched approaches.

To the extent that you can see any difference, it’s that traffic has gone up since I’ve stopped pursuing distribution.

This isn’t because distribution doesn’t matter, I remain pretty confident that distribution is more important than quality of content, but more that I think if you write consistently and of reasonable quality, folks who are focused on distribution will leverage your stuff towards their own goals, symbiotically and organically collaborating with you, the content creator. Said differently, distribution is still critical, but for most of us it’s more effective to piggyback on other folks’ distribution channels by writing good content that they want to share, then to develop our own.

The other primaary metric I started out focusing on was Twitter followers, where I started the year at about 2,200 and am now up to 3,500 (including +150 over the past thirty days), which is about half way to my somewhat arbitrary goal of 5,000 followers by the end of the year.

Somewhat interestingly, and strategically hidden by Twitter’s analytics tooling by only showing “new followers” for historical months, is that I was close to 3,500 followers three or four months earier, and lost about five hundred followers in what I assume was a bot follower purge. If that purge hadn’t happened, maybe I would be in striking distance to hit the followers goal, but I’m pretty sure that chasing that goal too directly isn’t too valuable. Rather, I have some latent hope that followers correlates to writing valuable writing, such that subjugating the system to that goal wouldn’t lead where I want to follow (more intentionally controversial takes, etc).

Reflecting on all of this over the past few months, I’ve adjusted my writing goals a bit, with a rough plan of focusing my writing on these areas for the rest of 2018 and likely through 2019 as well:

Otherwise, I’m also hopeful I can get more opportunities to speak publicly, both at conferences–which I’ve never actually done before, and would love to develop experience doing–and on podcasts, which I started doing this year and was able to do three so far.

Altogether, this has been a pretty productive year for me so far, and I hope to close it out well and carry the momentum forward into next year, without getting too deeply specialized in a single area of focus.