I've been trying to work on my design chops a bit lately, and there was a slight bit of interest in the AYM CMS project I wrote about recently, so I decided to put together a simple project website for it. 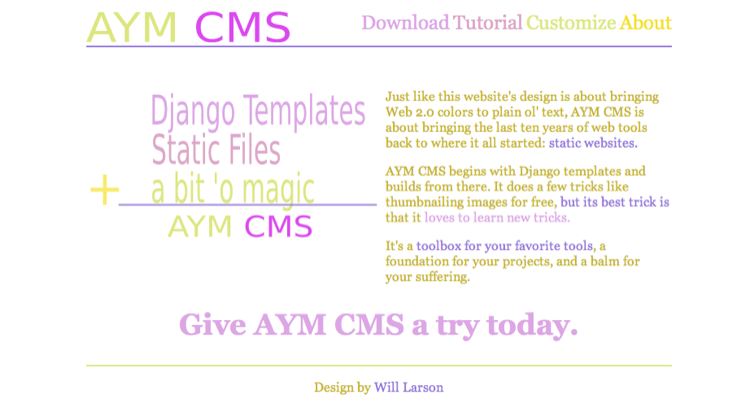 As advertised, it's simple, but it does have some good stuff. In particular the tutorial does a better job of explaining getting started with AYM CMS than anything else I've written.

The website will serve as the release point for new versions of AYM CMS, and also be a collection for all things AYM CMS. And, as one might expect, it was written using AYM CMS.

Probably my favorite part of the process is deploying, which is as simple as using scp to copy some files over to my server. The URLs aren't quite as pretty as I've grown accustomed to with Django's pretty URLs, but that's nothing some mod_rewrite couldn't solve.

It generally requires a rather hot fire to get me into mod_rewrite land (even though it would be something of a one-liner in this case), but perhaps it'll happen.

Let me know if you put together an AYM CMS site, and I'll add a link to your page from aymcms.com