One of the projects from my time at Stripe that I’m proud of was writing our engineering strategy, which I later sanitized into a public version in Magnitudes of exploration. The strategy was an elegant document that carefully reconciled two worldviews that had initially appeared incompatible within the engineering organization. While it was both a conceptually pure and utterly pragmatic document, in the end, it wasn’t particularly useful. It reflected how we described making tradeoffs as opposed to how we genuinely made tradeoffs.

Managing technical quality in a codebase.

If there's one thing that engineers, engineering managers, and technology executives are likely to agree on, it's that there's a crisis of technical quality. One diagnosis and cure is easy to identify: our engineers aren't prioritizing quality, and we need to hire better engineers or retrain the ones we have. Of course, you should feel free to replace "engineers" with "Product Managers" or "executives" if that feels more comfortable. It's a compelling narrative with a clear villain, and it conveniently shifts blame away from engineering leadership. Still, like most narratives that move accountability towards the folks with the least power, it's both unhelpful and wrong.

There are only a few magic spells to attain a Staff-plus role: negotiate for the title while switching roles or find a supportive environment to bake in place while building your internal credibility with an empowered sponsor who’ll advocate for you. The most important reagent in both spells is picking the right company to perform them at. The good news if you’re applying to a new company is that while you might invest weeks of energy into determining if you can get a Staff role there, you won’t need to invest years. On the other hand, if you’re looking for a company to join and grow within, you’re embarking on a years-long journey into an unknown organization. This is a daunting decision to make, and picking the right company for you will have a considerable impact on whether you attain a Staff-plus role.

My father was a professor of economics. After he completed his PhD in his late twenties, he started teaching at one university, got tenure at that university, and walked out forty-some years later into retirement. Working in technology, that sounds like a fairytale. There are very few software companies with a forty-year track record, and even fewer folks whose forty-year career consisted of one employer. There used to be a meme that many engineers spent either one or four years at each company to maximize their equity grants and then bounced on to the next. If that ever happened, it certainly isn’t common behavior for folks who aspire towards or reach Staff-plus roles.

In part "stuck away from friends due to pandemic" inspired, I've been wishing there was a tech writing community for semi-serious writers. As an experiment, I'm trying to spin such a thing up at techwriters.dev

Bert Fan’s best advice for those trying to reach a Staff-plus role was, "often reaching Staff is a combination of luck, timing, and work."

A popular recurring idea around reaching a Staff-plus role is that first you need to successfully complete a 'Staff project.' A project that is considered complex and important enough that the person who completes it has proven themselves as a Staff engineer. However popular this idea is, if you’re pursuing a Staff-plus role it’s important to pierce the mythology of these projects and focus on the experiences of folks who’ve walked the path before you.

Work on what matters.

We all have a finite amount of time to live, and within that mortal countdown we devote some fraction towards our work. Even for the most career-focused, your life will be filled by many things beyond work: supporting your family, children, exercise, being a mentor and a mentee, hobbies, and so the list goes on. This is the sign of a rich life, but one side-effect is that time to do your work will become increasingly scarce as you get deeper into your career. 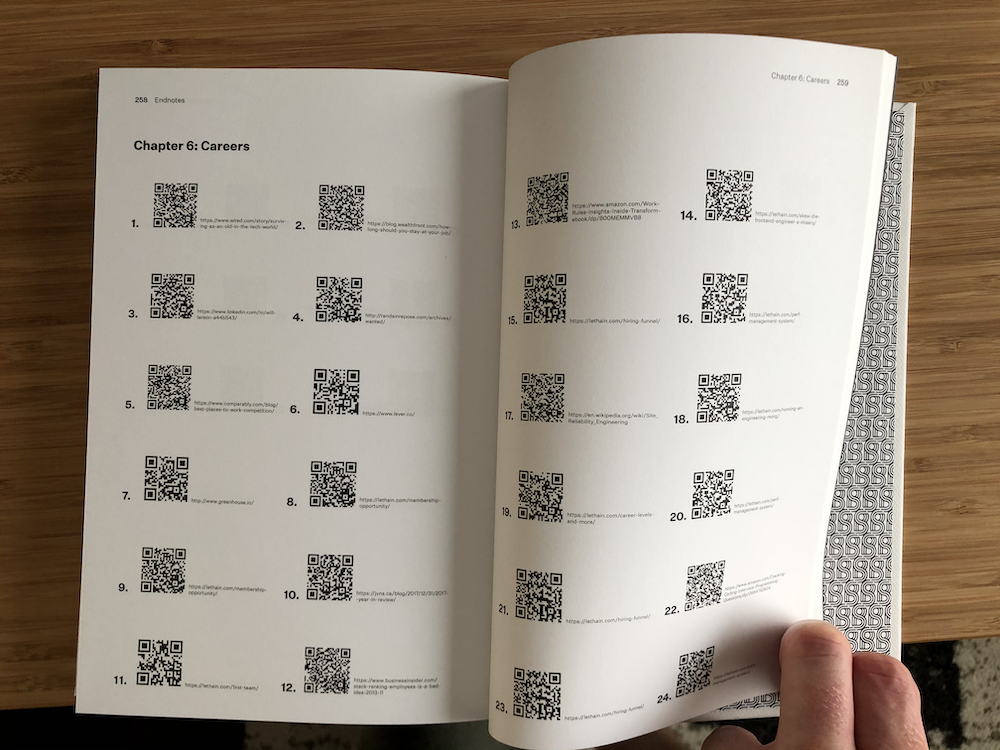 Probably my favorite parts of An Elegant Puzzle is the QR codes we created for each link as an exploration of how print and digital can comingle a bit more easily.